We can increase the magnetic field intensity by coiling the above-mentioned wire (see the figure). 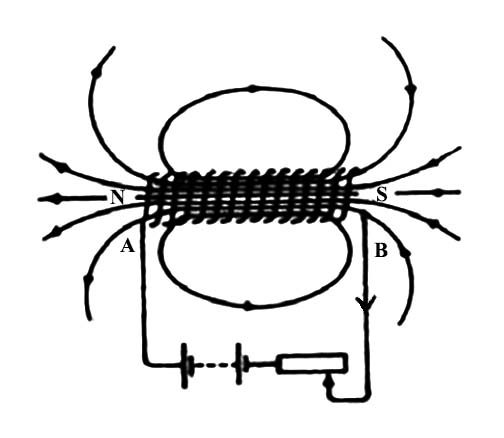 Due to the flow of the current through the coil, most of the lines of the force will be concentrated in the centre of the coil. The magnetic field will be look alike the magnetic field of the bar magnet. This type of coil is called Solenoid.

If we insert an iron rod through it, the iron rod will be turned into the magnet. The electro-mechanical device made up of a coil which produces a magnetic field when an electric current is passed through it. Such solenoids are used in relaying energy from one device to another, such as from an auto battery to an auto starter. In some applications, the coil surrounds an iron plunger which becomes magnetized and moves in one direction upon application of current. When the flow of current is reversed, the plunger moves in the opposite direction.

Such solenoids are used mainly in the opening and closing valves. If we stop the current, it will not remain magnet. If the direction of current is changed, the pole of the magnet will be changed. Through this process, the iron is turned into the magnet which is called electromagnet.