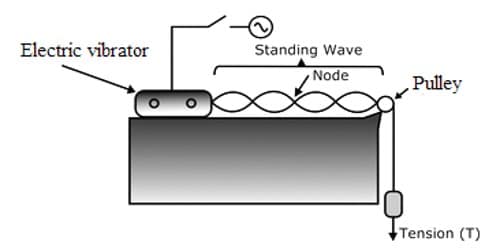 Name of the experiment: Melde’s Experiment

Theory: One end of a thread is fastened to one end of a tuning fork passed the thread through a pulley and a load is attached to the other end of the string in order to make it stretched.

Aim of the experiment: To find out the frequency of an electrically maintained tuning fork by, Melde’s experiment set up a light string is tied to one of the prongs of a tuning fork which is mounted on a sounding board. The other end of the string is passed over a horizontal pulley and a light pan is suspended from the free end.

N = frequency of the tuning fork

n = frequency of the thread

λ = wavelength of the wave produced in the thread

T = tension in the thread

m = mass of unit length of the thread.

(1) First of all the tuning fork is placed-in transverse of longitudinal position.

(2) Mass of the Melde’s instrument is taken by a balance.

(4) by placing some weight on the pan the thread is kept stretched.

(5) The tuning fork is struck lightly by a rubber hammer.

(6) by changing the position of the pulley horizontally and by changing weight in the pan the loops and the nodes are made distinct.

(9) Now taking weight twice on the pan wavelengths are measured following procedure 1-8 and average λ is found out.

(10) If the tuning fork was kept longitudinally earlier, then now the fork is kept transversely and following the previous procedure average wavelength is determined.

(11) Now the weight and length of the total thread are taken and dividing mass by the length. mass per unit length it is found out.

Then the frequency of the tuning fork for longitudinal and transverse positions is determined by using average wavelength, weight and in of each time.