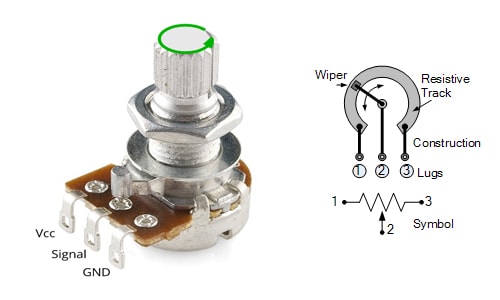 The instrument by which a small amount of potential difference and electromotive force can be measured by the potential drop method is called Potentiometer. The measuring instrument called a potentiometer is essentially a voltage divider used for measuring electric potential (voltage); the component is an implementation of the same principle, hence its name.

It is a manually modifiable variable resistor with 3 terminals. Two terminals are connected to both ends of a resistive element, and the third terminal connects to a sliding contact, called a wiper, moving over the resistive element.

The position of the wiper determines the output voltage of the potentiometer. It basically functions as a variable voltage divider. The resistive element can be seen as two resistors in series (potentiometer resistance), where the wiper position determines the resistance ratio of the first resistor to the second resistor. They are usually used to manage electrical devices such as volume controls on audio equipment. Potentiometers operated by a method can be used as position transducers, for example, in a joystick.