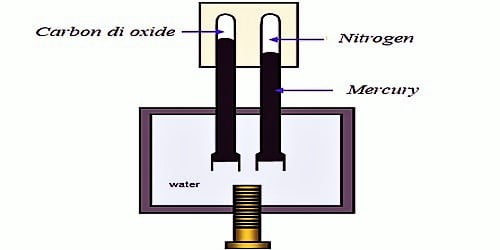 From 1861 to 1870 Andrews carried out his famous experiments on the effect of temperature and pressure on the volume of carbon dioxide. Andrews made a systematic study of the effect of pressure on the volume of gases at different temperatures. He used a simple apparatus (Figure 1) for the purpose. The apparatus consists of a thick-walled glass capillary tube T containing the gas which is enclosed with a drop of mercury. The capillary tube T is sealed into the metal compression chamber, M, by means of liquid-tight want. The chamber, M, contained water and is connected through C to an exactly similar chamber with a glass tube of the type T but containing air. This latter tube served as a manometer. The experimental gas is contained in the capillary tube T. The pressure applied on the water by screwing up the screw, S, is hydraulically transmitted from water to the volume of the air. The upper part of the carbon dioxide tube was surrounded by a heating bath so that the temperature could be varied. 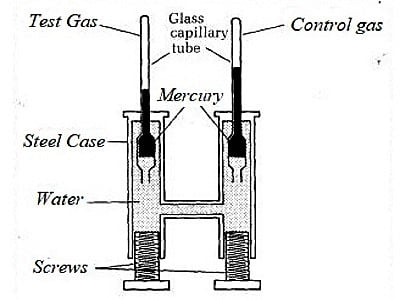 The volumes of the same mass of carbon dioxide at different pressures and at different constant temperatures were plotted by Andrews to obtain the curves shown in (Figure 2). These curves are known as Isothermals as each curve represents P-V data at a given temperature.

Consider the isothermal corresponding to the temperature T10 C. When the pressure is low the volume is large as at A. As the pressure is increased the volume decreases nearly in accordance with Boyle’s taw. When a certain volume B is reached liquefaction starts, the volume decreases rapidly but the pressure remains constant. The isothermal is horizontal until all of the gas is liquefied and the point C is reached. The portion CD of the isothermal represents the effect of pressure on the volume of liquid carbon dioxide. This part is steep, almost vertical, indicating that the liquid is much less compressible than the gas. AB represents the behavior of carbon dioxide gas. Along with BC both liquid and gas exist side by side (co-exist) and are in equilibrium, the pressure remaining the same. The pressure is not dependent on the relative quantities of liquid and gas. It will be seen later that the pressure at which a liquid and its vapor are in equilibrium at a given temperature, and known as the vapor pressure of the liquid, is an important quantity. 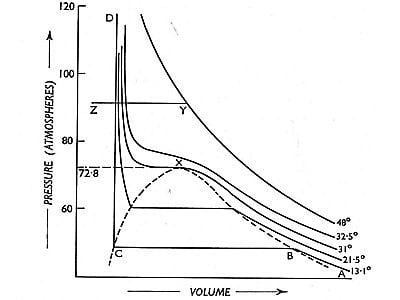 The isothermal at T10 C shows the same characteristic as that for T10C except that the horizontal portion showing the range of co-existence of liquid and gas is shorter than that for T10C. At higher temperature the horizontal portion gets rapidly shorter and. in fact at 31.1°C and above there is no horizontal portion at all. At 31.10 there is just a slight hump showing a very short range of co-existence of liquid and gas. Andrews found that in the liquefaction of carbon dioxide the temperature 31.10 C was critical in the sense that at any temperature above this value carbon dioxide gas could not he Liquefied even at a pressure of 300 to 400 atmospheres; whereas below this temperature, a much lower pressure would be, sufficient to liquefy the gas. Subsequently, it was found that for all gases this is a common phenomenon, the temperature depending on nature. The following critical phenomena can, therefore, be defined;