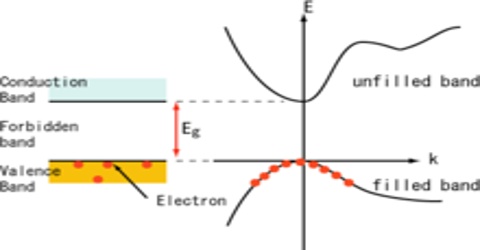 The ‘hole’ concept and conductance

A hole is the absence of an electron in a particular place in an atom. Although it is not a physical particle in the same sense as an electron, a hole can be passed from atom to atom in a semiconductor material. Electrons orbit the nucleus at defined energy levels called bands or shells. However, there are now a corresponding number of vacancies left in the electron population of the valence band. These vacancies, or holes as they are called, have the effect of carvers of positive charge, by means of which the valence band makes a contribution to the conduction of the crystal.

Transistors, which are used so widely in many fields, are ultra-pure silicon or germanium crystals into which are introduced very small amounts of impurities like arsenic or indium or other elements to give these crystals the semiconducting properly.