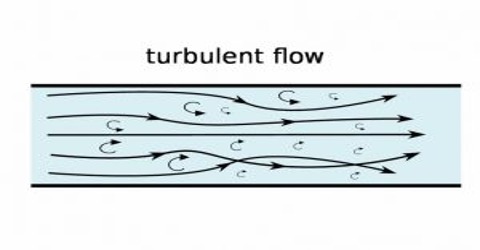 While travelling through river sometimes eddy is observed. Again some people might have seen surge or tidal bore of the sea. It is seen that water-particles randomly move up and down or move randomly right and left. In this case layers of flow are not parallel. Turbulent motion re flow is a type of fluid (gas or liquid) flow in which the fluid undergoes irregular fluctuations, or mixing, in contrast to laminar flow, in which the fluid moves in smooth paths or layers.

That means, if layers of flow are not parallel to each other, rather turbulence and eddy are formed, then that is called turbulent flow or chaotic flow. In turbulent flow particles of the flow neither follow the path nor velocity of the predecessor particles (Figure). Here the speed of the fluid at a point is continuously undergoing changes in both magnitude and direction.

Common examples of turbulent flow are blood flow in arteries, oil transport in pipelines, lava flow, atmosphere and ocean currents, the flow through pumps and turbines, and the flow in boat wakes and around aircraft-wing tips.

Effect of Temperature on Co-efficient of Viscosity in Liquids