Biot and Savart conducted many experiments to determine the factors on which the magnetic field due to current in a conductor depends.

The results of the experiments are summarized as Biot-Savart law.

Let consider a conductor XY carrying a current I (Figure). 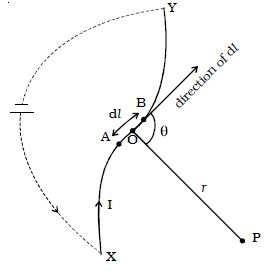 AB = dl is a small element of the conductor. P is a point at a distance r from the midpoint O of AB. According to Biot and Savart, the magnetic induction dB at P due to the element of length dl is

(i) directly proportional to the current (I)

(ii) directly proportional to the length of the element (dl )

dB = K (Idl sinθ)/r2; K is the constant of proportionality

The constant K = μ/4π; where μ is the permeability of the medium.

The direction of dB is perpendicular to the plane containing current element Idl and r (i.e plane of the paper) and acts inwards. The unit of magnetic induction is tesla (or) weber m-2.