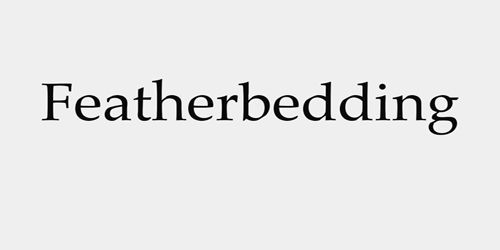 Featherbedding is a term used to describe when an employer is required by a trade union to increase the cost of labor, such as by hiring more workers than necessary to perform a particular job. Featherbedding, for labor union practices, requires the employer to pay for work that is considered unnecessary or for work that is not actually performed or for hiring workers who are not needed. The existence of Featherbedding in a particular case is usually disputed and depends on what is considered reasonable. The term “make-work” is sometimes used as a synonym for featherbedding. It often takes the form of hiring more workers than employers need, although it can also include adopting practices that slow down productivity, as well as add time-saving, make-work policies, and methods to increase labor costs. Featherbedding may be considered for work rules that require a large number of employees or limit the amount of work an employee can do in a given period of time.

Featherbedding also occurs when employees who are not needed need to be retained by the union, or when the union claims that employers hire workers who have been declared ineligible for a particular position. The term may apply equally to middle- and upper-level management, especially to top-heavy and “swollen” levels of middle- and upper-level management. Featherbedding rules in labor contracts may result in a continuation of labor rules that were once efficient but have become obsolete due to changing technology. Featherbedding is sometimes used to describe hired behavior by corporations in response to economic control. A union may insist on continuing such national work regulations to ensure employment security for its members. In some cases, unions are designed to ensure the safety of the public in building codes and other laws, but in practice follow feather abandonment procedures. Detectors claim that featherbedding encourages old and inefficient practices and policies, especially those made obsolete by technical expertise.