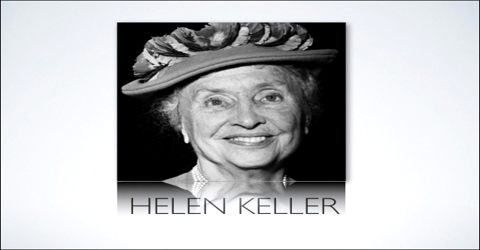 Helen Keller, a world acclaimed sightless handicapped woman, was one of the wonderful characters of 19th century. She was born on 27 June 1880 at Tachcambia in America where she was born as healthy and normal child. At the age of one and a half year, Helen Keller was attacked by ‘Brain Fever’. Helen Keller lost her eyesight through this disease. She became sightless and she partially lost her power of hearing. The day which was an unforgettable day of her life was March, a day of 1887 when a mistress Anne Sulivan took the charge of Helen as a student. She took the charge because she became also blind at the age of twenty but she got back her eyesight. In the case of Helen it was negative because she did not get back her eyesight forever. Sulivan took the charge as a mistress through Alexander Grambell. 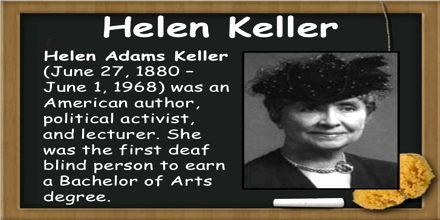 lnspite of being a sightless woman, she became world famous obtaining graduation degree in 1904. It was her last academic certificate though different universities gave her various honorary degrees for her excellence and merit. She read about modern world about men and she collected different types of news and information. Her mistress, Sulivan came to knew this at the very start of teaching when she thought her about D-O-L-L. She was successful to teach her about the first word ‘DOLL’. She gave a glass of water to Helen in one hand and she wrote ‘W-A-T-E-R’ with her other hand Helen realized it to feel the liquid. Sulivan was beside Helen at the end of her life though she was then in her husband’s house. Riding horse was her favorite hobby. She died on the first June at Aracan Rise before a few weeks of her 88th birthday. So. Helen is the blazing example of sightless handicapped child all over the world.

The U.S. public trust on medical scientists has increased but the Change Is along Party Lines