Home Other The Author I like Most – Sarat Chandra Chattopadhyay 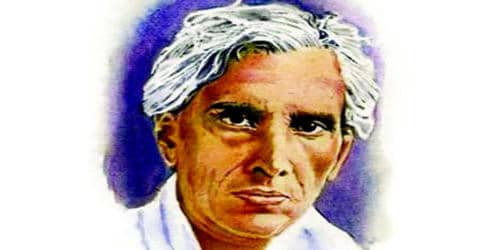 Sarat Chandra Chattopadhyay was a legendary Bengali novelist from India. He was a gifted writer and he kept his habit of writing all through his life. I have gone through novels and stories of many renowned writers of Bengali literature of all writers, I like Sarat Chandra Chattopadhyay most. His simple style and lucid language replete with humor, wit, and satire have attracted me. He is arguably the most popular novelist in the Bengali language.

His writing aimed at criticizing the evils and superstitions of the society which still prevails in the rural areas. Much of his writing bears the mark of the resultant turbulence of society. So, his novels and stories reflected oppression of the Zamindars land-lords, feudal lords, rising capitalists and industrialists over the poor class in the villages. His notable works include Devdas, Srikanta, Choritrohin, Parineeta, Grihadaha, Datta, Pather Dabi, Sesh Prasna, etc. I like to study his novels and stories. All his writing appeared to be a golden treasure to me. I read mindur chhele, Mejdidi, Barodidi, ahesh, Palli Shamaj, Charitrahin, Griha Dah, Ramer Shumati, Devdas, Pather Davi, and many other novels written by Sarat Chandra Chattopadhyay. Among his stories, Mahesh, Ramer Shumati, Malar Fol are the most remarkable for their human apple. He started writing in his early teens and two stories written then have survived—‘Korel’ and ‘Kashinath’.

His style is simple but very upright. Most of his works deal with the lifestyle, tragedy, and struggle of the village people and the contemporary social practices that prevailed in Bengal. His subject matters are taken from the real-life which we observe in our day to day life. The men and women of his stories and novels are, as if, our nearest one and we are very much acquainted with them, his dialogues are captivating. A prolific writer, he found the novel an apt medium for depicting this, and, in his hands, it became a powerful weapon of social and political reform. His characterization is really charming and appreciable. We can never forget the characters like Gafur, Gaya Ram, Barodidi, Devdas, Parbati, Chandra Mukhi, Rajlakshmi, Shrikanta, etc. All these characters stir our filing and influence our mind very actively. Sharat Chandra was not only a writer but also a social reformer and humanist. He was one of the most popular Bengali novelists of the early 20th century.

He wrote about the struggles of the poor and the people from the village people who suffered a lot under the British Raj. He had a strong desire for ideal women for heavenly peace in family life. His female characters are still considered to be the role model for women in Bengali society. All his female characters are created as ideal women with an extraordinary quality of patience, tolerance, endurance, sympathy, simplicity, sincerity, truthfulness. He was perhaps the first writer in Bangla literature to be accepted by people from every class of society. He had great sympathy for the poor and oppressed people. He was in favor of the downtrodden people. His depiction of Bengali society is unmatched by any writer before or after him. He aimed at establishing justice in society. He wanted to remove disparity and inequality from society. He advocated for removing evils, superstitions from the society. Sensitive and daring, his novels captivated the hearts and minds of thousands of readers not only in Bengal but all over India.

So I admire him from the core of my heart because he was a real humanist. He wrote some short and long stories that became famous but it was in the novel that he showed his skills best. His novels earned him fame and fortunate- both. He remains the most popular, most translated, most adapted, and most plagiarized Indian author of all time.

Giving EV batteries a second life for sustainability and profit