Home Other A Journey by Launch 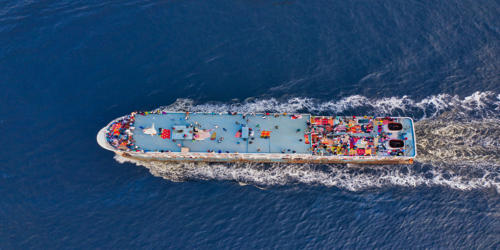 A Journey by Launch

A few days ago, I had an opportunity to make a journey by launch. I was on the way back to Dhaka after spending the holidays of Eid-al-Adha. I boarded a launch at our village ‘ghat’ to reach Narsingdi.

The launch was packed up with passengers and goods. It was carrying passengers beyond its capacity. Somehow, I managed a seat in one corner of the deck. Within a few minutes, the launch started. Soon the village ghat went out of sight.

The launch began to move at a good speed through a small river. With the rattling of the engine, I felt a sense of movement. The vessel seemed to advance with rhythmic jerks. I kept sitting on the deck of the moving launch. When my eyes caught glimpses of the villages on both sides of the river, I enjoyed the sights around. Thee houses, trees, green fields on both the banks of the river were moving in the opposite direction. The villages on the banks looked very attractive to me. At about 3 pm the launch reached the Meghna river. The junction of the river seemed so wide and fearful that I could not hide my feeling of surprise and fear. Because of a strong current, our launch started spattering for a time with sudden jerks.

I was filled with fear and anxiety. However, it came very soon to its own position and there was now a vast expanse of water before us. Both the banks of the river Meghna looked green. A string of boats was found to be plying up and down the river. Fishermen were seen busy about catching fish here and there.

The launch sped on and after an hour’s journey, it crossed the Meghna and proceeded through a small river again. We could now enjoy the rural scenery very closely. The villagers were standing on the bank. Women were seen here and there coming to the ghats of the river to fetch water in their pitchers. Farmers were cutting paddy and jute plants. Many were singing Bhatiali, sharee gan (Song) very joyfully. The varied picture thus filled my heart with joy and pleasure. The sun was about to set. The big sheds of jute offices at Narsingdi came to our view. It looked very nice from the launch. It was the end of the day and the sun was going down in the west. My heart was dancing when I saw the setting sun reflected on the river. The scenes on the river and the sights visible on the horizon on a long-distance were really very charming. The launch touched the Narsingdi launch terminal. The journey by launch now came to an end.

I got, down from the launch and hurriedly rushed to the Narsingdi Railway station to take the train for Dhaka. Though the journey was made amidst rush and jostle, it left some pleasant memories in me.