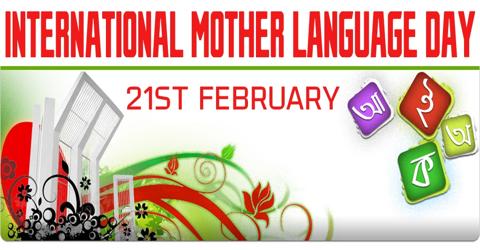 21st February has been recognized as International Mother Language Day by the UNESCO. On this day in 1952, the streets of Dhaka city were reddened with the blood of the valiant sons of the soil, demanding Bengali as their mother tongue. They foiled the conspiracy of the then Pakistani rulers. Shedding blood for the mother tongue is rare example in the history of the world. The UNESCO has considered this remarkable event and proclaimed this day to be celebrated internationally. The 191 member states by common consent accepted the resolution. Thus the day has become a day of worldwide celebration.

The government decoded to quell the protest by brute force. The police opened fire on unarmed peaceful protesters on the 21st February, 1952. Most of them were students. It resulted in the death of Rafiq, Shafique, Salam, Jabbar and Barkat. They lost their lives to uphold the prestige of own mother tongue and to defend the right of it. The sacrifice was both tragic and glorious. As the news of these spread, the entire people of the eastern wing became shocked. From 1953 onward, the immortal 21st February has been observed as a great national event all over Bangladesh and also beyond the frontiers of Bangladesh; in several places in India, UK, USA, Canada and elsewhere.

The recognition of February 21 as the International Mother language by UNESCO is an important event in the history of Bangladesh. It is an important event for the language lovers all over the world. And importantly, the language movement teaches us that we have raise for achieving our rights, for establishing our place of honor and dignity in the world. it teaches us not to bow down to any oppression. It also inspires us to sacrifice our most treasured thing for sake of the country.

For About 3,000 Years, Neanderthals and Modern Humans May Have Coexisted