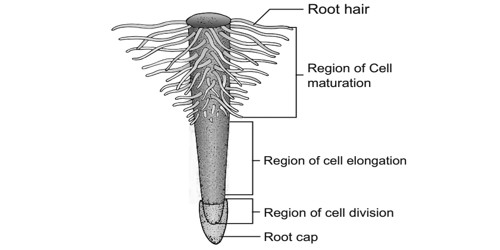 The root is covered at the apex by a thimble-like structure called the root cap (Figure). It protects the tender apex of the root as it makes its way through the soil. A few millimeters above the root cap is the region of meristematic activity. The cells of this region are very small, thin-walled and dense protoplasm. They divide repeatedly. The cells proximal to this region undergo rapid elongation and enlargement and are responsible for the growth of the root in length. 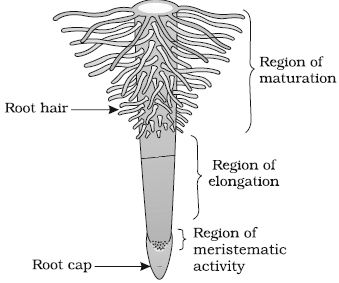 It is a small region of actively dividing cells called the apical meristem. It consists of: Dermatogen, Periblem, and Plerome. These cells divide actively. This region is a few millimeters above the root cap. The cells in this region are thin-walled with dense protoplasm.

This is subsequently to the area of elongation, in which, the cells grown-up and set apart into diverse tissues constituting. The zone of maturation is proximal to the zone of elongation. Root hair to absorb water and nutrients from the soil. It also gives rise to lateral roots.

What do you mean by Fatty Oil or Fixed Oil?