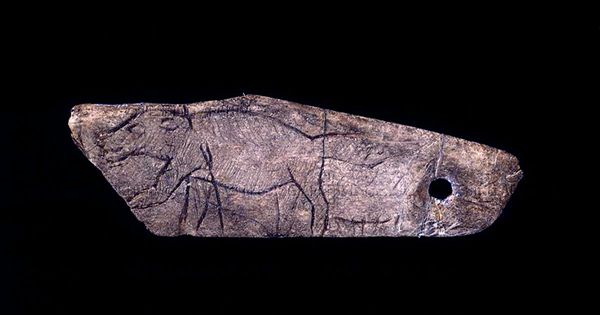 A shattered ivory pendant was discovered in a Polish cave dated 41,500 years old, making it Eurasia’s oldest ivory jewelry. It is also the first example of an ornament with puncture marks in a looping curve, which might be an early tally sheet or belt notches. If this is the case, the artefact might be the first evidence of mathematics or astronomy ever discovered, marking a pivotal moment in human development.

Several objects manufactured from mammoth tusks have been discovered with curved lines of holes across Europe and Asia. Despite the fact that they may have been just aesthetic, they said to have signified something far more important for human development: counting. Hunting success tally sheets or an analemma charting the Moon’s motions throughout the sky are two ideas.

Unfortunately, most of these discovered and relocated when dating procedures were less established, and attempts to determine their ages have yielded conflicting results. A pendant discovered in Stajinia Cave in southern Poland in 2010 presented an opportunity to change that. According to research published in Scientific Reports, it happened about the same time that Homo sapiens arrived in Europe and before any other verifiable dates.

In a statement, first author Professor Sahra Talamo of Bologna University remarked, “Determining the exact age of this jewelry was crucial for its cultural attribution, and we are happy with the finding.” The necklace discovered with a horse bone awl (a tool for punching holes), stone tools, and animal bones, all of which might help us learn more about the society that created it.

The cave inhabited by Neanderthals and modern people at various times, but the researchers are certain who created the necklace and awl. “This piece of jewelry demonstrates the members of the Homo sapiens group that occupied the site’s exceptional ingenuity and physical abilities.” “The plate is roughly 3.7 millimetres thick, and the punctures and two holes for wearing it were carved with incredible accuracy,” said co-author Dr. Wioletta Nowaczewska of Wrocaw University.

These markings have discovered on goods from Germany and southwest France — a long way from Poland when all travel is done on foot. Similar artifacts discovered ten thousand years later in northern Siberia. “Whether the looping arc of the Stajnia pendant represents a lunar analemma or kill scores will remain an open subject.”However, it’s amazing that comparable decorations appeared independently across Europe,” said co-author and Polish Academy of Sciences Professor Adam Nadachowski.