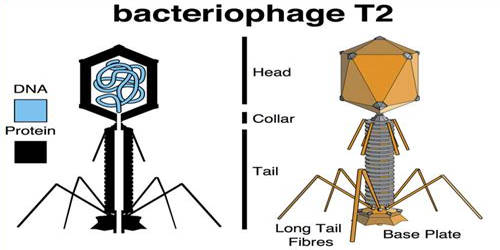 A phage is a virus that attacks bacteria. Phages are among the best known of viruses because of the ease of studying bacterial systems. There are various types of viruses in the world, As a representative of viruses, T2 Phage is introduced here with its importance.

Structure: Many phages are among the most structurally complex viruses known. The T2 phage is a typical one common group of phages. T2 Phage is a cellular. Its body is divided into two parts- head and tail; the head is hexagonal and the tail is rod-shaped, a protein shell surrounds the body. Inside the shell, there is a’ double-strand DNA in its head. The body of the virus, called a capsid, is a complex structure with a head containing DNA and a tail apparatus that attaches to receptors on the surface of the bacterial host. At the upper end of the trail, there is a collar, and at the lower end, there is a base plate, some spikes and attachment fibers. In Viruses, there is no nucleus, cell membrane, cytoplasm, and other organelles. 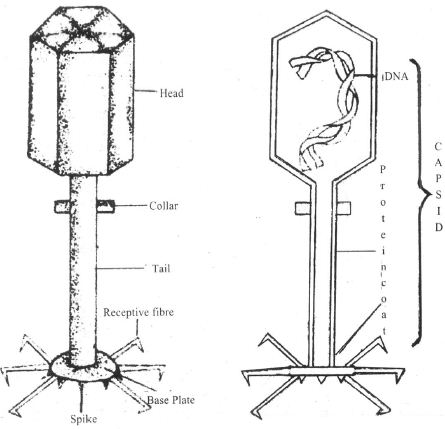 Multiplication: Viruses can multiply only inside some other living cells. T2 Phage attacks a Bacterium. It keeps the protein shell outside; its DNA enters into the Bacterial Cell. Later on it (the Viral DNA) makes the Bacterial DNA inactive and makes many new Viruses. Ultimately the Bacterial cell is destroyed and new Viruses came out. T2 and all the other T phages that attack E. coli have a lytic life cycle. If they are successful in infecting a cell, the cell is invariably destroyed.

Importance of Viruses: Deadly human diseases like Measles, Pox, Polio, Hydrophobia, Influenza, Harpies, Viral hepatitis, etc. are caused by Viruses. Viruses cause about 300 diseases of various plants and crops. Many diseases of domestic animals like -Cow, Goat, Pig, etc. are caused by Viruses. Viruses are also responsible for fatal diseases like – AIDS (Acquired Immune Deficiency Syndrome), Cancer, etc. Vaccines of several diseases like -Pox, Polio, and Hydrophobia, etc. are also produced from Viruses. Other phages have lysogenic life cycles that do not necessarily harm the host cell.

Definition of Virus in Botany