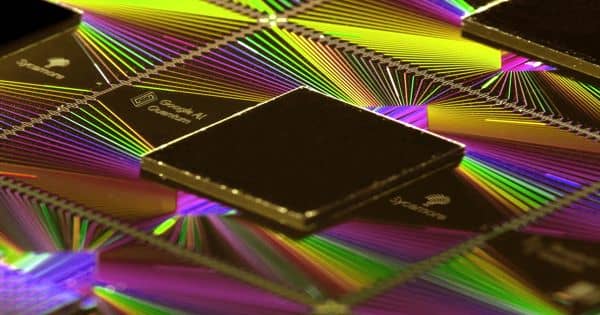 Quantum mechanics, a sub-field of physics that explains the action of extremely small particles, provides the basis for a modern model of computation. One of the challenges to success in the search for a functioning quantum computer has been the fact that the working instruments that go into the quantum computer and do the real calculations, the qubits, have so far been made by universities and in small numbers. But in recent years, a pan-European collaboration, in cooperation with French microelectronics pioneer CEA-Leti, has been researching day-to-day transistors-present in billions on all our cell phones-for their use as qubits.

The French company Leti makes giant wafers full of devices, and, after measuring, researchers at the Niels Bohr Institute, University of Copenhagen, have found these industrially produced devices to be suitable as a qubit platform capable of moving to the second dimension, a significant step for a working quantum computer.

The classical computer uses bits to represent the values on which it operates; the quantum computer uses quantum bits or qubits. A bit may be either 0 or 1, while a qubit maybe 0 or 1 or a combination of both at the same time (known as a “superposition”). Although the status of a classical computer is calculated by the binary values of a set of bits, at any particular moment in time the status of a quantum computer with the same number of quantum bits will cover all possible states of the corresponding classical computer and hence function in an infinitely greater problem field.

Quantum dots in a two-dimensional array is a leap ahead

One of the main distinctions between a classic computer and a quantum computer is how it treats small, unexpected fluctuations or noise in the device. One of the main features of the system is a two-dimensional quantum dot array. Or more specifically, a two-by-two lattice of quantum dots. “What we have seen is that we can obtain a single electron control in both of these quantum dots. This is very important for the creation of a qubit, since one of the potential ways to produce qubits is to use a single electron spin. So it was really important for us to accomplish this aim of manipulating single electrons and doing so in a 2D array of quantum dots,” says Fabio Ansaloni, a former PhD student, now a postdoc at the Quantum Devices Centre, NBI.

While a quantum machine may use a limited number of qubits to reflect an infinitely greater quantity of data, there is currently no mechanism for quickly transforming a huge amount of classical data to a quantum state. The use of electron spins has proved to be beneficial for the application of qubits. In particular, their “quiet” nature allows spins weakly to interfere with the noisy world, and it does matter.

The importance of industry scale production

Assistant Professor at Center for Quantum Devices, NBI, Anasua Chatterjee adds: “The original idea was to make an array of spin qubits, get down to single electrons and become able to control them and move them around. In that sense, it is really great that Leti was able to deliver the samples we have used, which in turn made it possible for us to attain this result. A lot of credit goes to the pan-European project consortium, and generous funding from the EU, helping us to slowly move from the level of a single quantum dot with a single electron to having two electrons, and now moving on to the two-dimensional arrays. Two-dimensional arrays are a huge goal because that’s beginning to look like something you absolutely need to build a quantum computer. So Leti has been involved with a series of projects over the years, which have all contributed to this result.”

A chapter in itself is monitoring errors arising in the devices. A lot of mistakes are made by the machines we use today, but they are corrected by what is called the repetition code. You may provide details on either a 0 or a 1. on a traditional computer. The computer repeats the equation in order to guarantee that the result of a calculation is correct, and if one transistor makes a mistake, it is corrected by a clear majority. If any of the calculations done on other transistors point to 1 rather than 0, the result is 1. This is not feasible on a quantum machine so you cannot produce an exact duplicate of a qubit, but quantum error correction operates in another way: state-of-the-art physical qubits do not yet have a low error rate, but if enough of them are mixed in a 2D series, they can keep each other in place, so to speak. This is another benefit of the 2D array that has now been realized.

The next step from this milestone

The consequence of the Niels Bohr Institute indicates that it is now possible to monitor single electrons and conduct the experiment in the absence of a magnetic field. But the next step is to search for spins-spin signatures-in the presence of a magnetic field. This will be important for the implementation of single and two qubit gates between single qubits in the series. The theory has shown that a handful of single and two qubit gates, called a full set of quantum gates, are adequate to allow universal quantum computing.

Quantum computing will be a perfect complement to the work that we do (and will continue to do) on classic computers. Quantum takes computation the complete circle in several ways, bringing us another way to speak the language of the cosmos and to understand the world and humanity not only in 1s and 0s, but in all its states: majestic, dynamic, and boundless.