Google Maps is actually receiving a previously teased update to virtual reality. Google has revealed plans to add an AR navigation feature to its Maps app. Nine months back, the feature is now being rolled out to a small number of Google users—giving the world a first taste of the possible future of moving around.

The AR feature, known as ‘Live View’, was initially launched to Google Pixel smartphone users earlier this year and will now be expanded to all compatible Android and iPhone handsets running Android version 7.0 and iOS 11 respectively. Both AR-compatible mobile users can now view displays in their vicinity. Android devices that support ARCore or iPhones that support ARKit will be able to use Google Maps Live View. 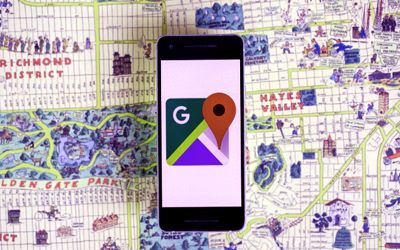 The Wall Street Journal published a story describing reporter David Pierce’s experience evaluating an early iteration of the Maps AR feature. In it, he mentions how the feature introduced a layer of graphics to the “real world” seen through the camera on his mobile. These graphics varied from broad arrows pointing in the direction Pierce wanted to travel to the text that seemed to float above the pavement, letting him know how many moves he needed to take before his next turn.

The AR uses the GPS location and the Google Street View index of street images to assess location and orientation. These images are compared and paired with a live camera feed to a spot position. By default, this feature will only be accessible in regions where Street View is available. “It was as if Maps had drawn my directions to the real world,” he said, “though no one else could see them.”

According to Pierce, Google is only preparing to make the new edition of the AR browsing feature accessible to “a few Local Guides, who are the most dedicated reviewers and users of the service.” The rest of the planet will not have access to the feature until Google is happy with it, and it doesn’t tell when. Google said it’s been exploring Live View with the Local Guides and Pixel community over the past few months, and now the company is expanding it to Android and iOS devices that support ARCore and ARKit.

This is one of the key advantages of using AR in maps since it overcomes the disadvantage of standard Google Maps – people sometimes get confused about directions and slowly refresh GPS, they turn in the wrong direction. Even, it appears that Google is committed to make AR part of the future. And considering that the company has such a massive presence in the present, that means that AR is likely to be part of our future as well.

Another significant built-in feature in AR mode is that it dissuades pedestrians from crossing the streets while looking at the phone screen. The app senses a human moving while the AR mode is on. If the individual ignores the warning sign and persists, the AR mode will go blank after a few seconds and demand that the phone should be lowered.