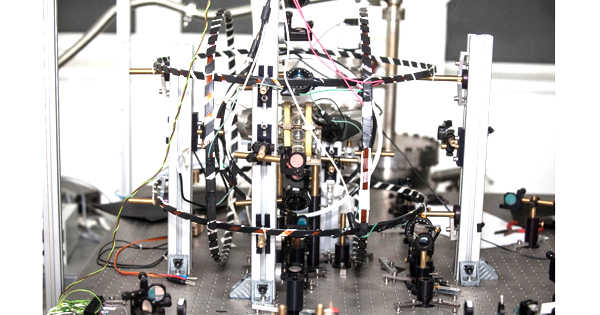 Scientists have created a ground-breaking quantum logic gate, bringing quantum computing one step closer to reality. A missing piece in the puzzle of optical quantum computing has been discovered by researchers at Washington University in St. Louis’ McKelvey School of Engineering.

“In the ideal case,” Shen said, “fidelity can be as high as 97 percent.” His findings were published in Physical Review A.

The extraordinary properties of superposition – the ability of a quantum system to contain many distinct properties, or states, at the same time – and entanglement – two particles acting as if they are correlated in a non-classical manner, despite being physically separated from each other – limit the potential of quantum computers.

Whereas in a classical computer, voltage determines the value of a bit (a 1 or a 0), researchers frequently use individual electrons as “qubits,” the quantum equivalent. Electrons have several characteristics that make them well suited to the task: they are easily manipulated by an electric or magnetic field, and they interact with one another. Interaction is advantageous when two bits must be entangled in order for the wilderness of quantum mechanics to manifest.

However, their proclivity to interact is also a problem. Electrons can be influenced by anything from stray magnetic fields to power lines, making them difficult to truly control. However, for the past two decades, some scientists have attempted to use photons as qubits rather than electrons. “If computers are to have a true impact,” Shen says, “we need to look into creating the platform using light.”

Photons have no charge, which can cause problems in the opposite direction: they do not interact with the environment like electrons, but they also do not interact with one another. Engineering and creating ad hoc (effective) inter-photon interactions has also been difficult. So the conventional wisdom went.

Scientists working on this problem discovered less than a decade ago that even if two photons were not entangled when they entered a logic gate, the act of measuring the two photons when they exited caused them to behave as if they were. The peculiarities of measurement are yet another bizarre manifestation of quantum mechanics.

“Quantum mechanics isn’t hard, but it’s full of surprises,” Shen said. The measurement breakthrough was groundbreaking, but not game-changing. Because only one pair of photons became entangled for every 1,000,000 photons. Researchers have since had greater success, but, according to Shen, “it’s still not good enough for a computer,” which must perform millions to billions of operations per second.

Shen was able to construct a two-bit quantum logic gate with such efficiency thanks to the discovery of a new class of quantum photonic states called photonic dimers, which are photons that are entangled in both space and frequency. In 2013, his prediction of their existence was experimentally validated, and he has since been searching for applications for this new type of light.

When a single photon enters a logic gate, nothing notable happens; it simply enters and exits. However, when there are two photons, “That’s when we predicted the two could combine to form a new state, photonic dimers. This new state turns out to be critical.”

“There is no minus sign in classical circuits,” Shen explained. “However, it turns out that the minus sign exists and is critical in quantum computing.” “The design of the logic gate is such that the two photons can form a photonic dimer,” Shen said, when two independent photons (representing two optical qubits) enter the logic gate. “It turns out that the new quantum photonic state is critical because it allows the output state to have the correct sign, which is required for optical logic operations.”

Shen has been collaborating with the University of Michigan to put his design, a solid-state logic gate that can operate in moderate temperatures, to the test. So far, he says, the results appear to be positive.

Shen claims that, while most people are perplexed by the outcome, it is obvious to those in the know. “It’s like putting together a puzzle,” he explained. “It may be difficult to do, but once completed, you will know it’s correct just by looking at it.”