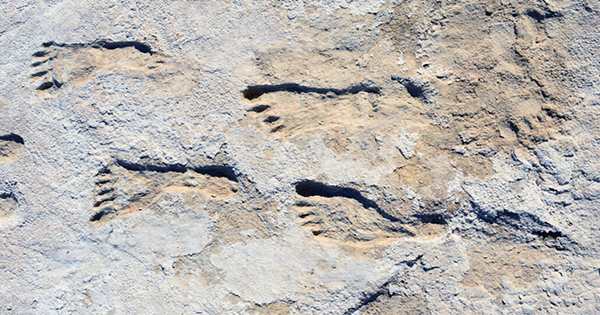 Mary Leakey and her crew discovered some of the most renowned footprints in the world at Laetoli, Tanzania. Their discovery in 1978 demonstrated that 3.66 million years ago, hominins, probably our immediate predecessors, walked upright. Another pair of footprints was discovered nearby in 1976 by the Leakey survey, but their identification was less definite, thus they were neglected.

Now, archaeologists have examined the equivocal impressions discovered at Laetoli Site A and discovered that they show two bipedal hominid species formerly coexisted.

The prints were re-examined by the team using today’s more technology that is modern. They write in Nature that the Laetoli Site prints were almost probably the work of a hominin, but not the same species as the more famous pair nearby, based on comprehensive analyses of bear and chimpanzee prints.

An incredible 18,000 animal impressions have been discovered in the volcanic ash at Laetoli Site A, but the five definitely created by an animal traveling on its hind legs are of particular interest. They were created by a hominid, according to Mary Leakey.

Others on the crew, on the other hand, believed they may have come from a bear walking upright and were hesitant to create a fuss over something so inconclusive. Laetoli A prints were mostly forgotten when the unequivocal, now renowned prints were discovered at Laetoli Site G, with a second find at Site S.

In a statement, first author Dr. Ellison McNutt of Ohio University remarked, “Given the accumulating evidence for locomotor and species variety in the hominin fossil record over the past 30 years, these atypical prints merited further investigation.” McNutt was part of a huge team that rediscovered the prints and 3D scanned them using Leakey’s archives.

The authors next used maple syrup to entice four semi-wild American black bears, all of which were young enough that their prints matched those at Site A in size, to walk bipedally on mud. Even accounting for the possibility that an ancient Tanzanian bear was of a different species, the scientists are certain that no member of the genus Ursus created the prints at Laetoli Site A.

“[Bears] are unable to walk with a stride comparable to the Site footprints because their hip musculature and knee morphology do not support that type of mobility and balance,” stated Dartmouth’s Dr. Jeremy DeSilva. Furthermore, while bears may walk on two legs, they only do it on rare occasions, hence bipedal prints are uncommon. Close cousins of chimps ruled out in a similar study.

The prints depict a cross-step in a way that humans do not while moving easily, but rather those of someone striving to maintain their balance on uneven terrain. Additional prints from the Laetoli G tracks’ creators would be valuable, but the two do not match. Instead, the tracks maker at Site A was tiny and had feet that looked like they belonged to a different species.

“The footprints at the site are preserved in the same ash layer as the tracks formed at sites G and S,” DeSilva told. “This means that they were made within (at most) days of one another, but more likely hours or minutes.” “On the terrain, these two hominins were neighbors.”

The authors do not dispute that the Laetoli Site G prints have long been linked to Australopithecus afarensis, including the famous Lucy specimen. “The footprints at sites G and S fit the foot bones from A. afarensis far better than the prints at site A,” DeSilva told. “The problem now, in this paleoanthropological Cinderella, will be to figure out which hominid foot matches the Laetoli A slipper.” As options, DeSilva recommended Kenyanthropus platyops and Australopithecus deyiremeda.