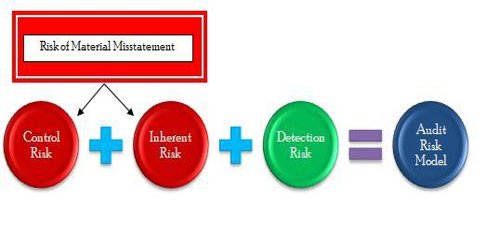 Audit risk is the risk that the auditor may unknowingly fail to appropriately modify his or her opinion on financial statements that are materially misstated. It is the chance that financial statements will be issued with materials errors even though they have been reviewed by an auditor and approved.

The model idea itself is a formation of auditors in the United States, but the terms used in the model are all derived from GAAS, Generally Accepted Auditing Standards. Using this procedure, the auditor decides what controls can be used to run tests, what controls need to be tested themselves and what allocation of tests will present the best results for the audit.

Audit risk model: A formal reflecting the relationship risk between acceptable audit risk, inherent risk, control risk and planned detection risk. The audit risk model determines the total amount of risk associated with an audit and describes how this risk can be managed. The calculation is:

Business risk: Risk that the auditor or audit firm will suffer harm bemuse of a client relationship even though the audit report rendered to the client was correct.

Risk: The acceptable by auditors that there is some level of uncertainty in performing the audit function.

Why verification is done in auditing to vouching?

Significance of Dating of Report

Relationship between Test of control and Assessing Control Risk