The instruments used in the laboratory are —

Mechanism of using burette to determine the volume of liquid – 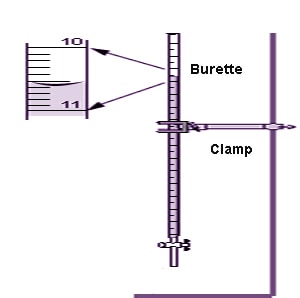 (i) At first the burette is placed vertically with the help of burette holder as shown in the figure.

(ii) The burette is washed with distilled water keeping the stop cork open. A beaker is also placed under the burette to collect the water.

(iii) Then closing the stop cork, the liquid is taken in the burette in such a way so that there are no any bubbles in the burette

(iv) After removing the beaker. a conical flask with the required amount of liquid which reacts with the reagent from burette is placed under the burette properly

(vi) Then the reading is taken from burette scale and the result is calculated.

Define and Describe on Heavy Metals

What is Secondary Standard Substance?

Define Pyropharic Substances and Explain How to Overcome this Hazards