When a gas undergoes expansion or compression at the constant temperature, the process is called isothermal process.

Let consider a gas in a cylinder provided with a frictionless piston. The cylinder and the piston are made up of conducting material. If the piston is pushed down slowly, the heat energy produced will be quickly transmitted to the surroundings. Hence, the temperature remains constant but the pressure of the gas increases and its volume decreases. The equation for an isothermal process is PV = constant.

If a graph is drawn between P and V, keeping the temperature constant, we get a curve called an isothermal curve. Isotherms for three different temperatures T1, T2 and T3 are shown in the Figure. The curve moves away from the origin at higher temperatures. 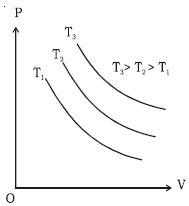 During an isothermal change, the specific heat capacity of the gas is infinite.

Melting of ice at its melting point and vaporization of water at its boiling point.

What is Potential Energy?

Derivation of Equation for Kinetic Energy