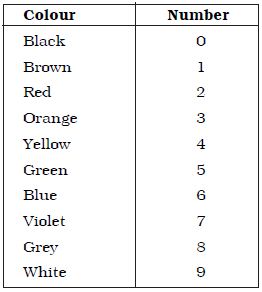 A three colour code carbon resistor is discussed here. The silver or gold ring at one end corresponds to the tolerance. It is a tolerable range ( ± ) of the resistance. The tolerance of silver, gold, red and brown rings is 10%, 5%, 2% and 1% respectively. If there is no coloured ring at this end, the tolerance is 20%. The first two rings at the other end of tolerance ring are significant figures of resistance in ohm. The third ring indicates the powers of 10 to be multiplied or number of zeroes following the significant figure.

What is Tangent Galvanometer?