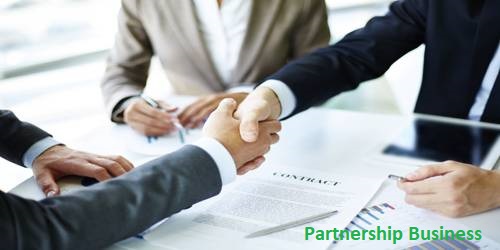 “Two head is better than the one” is the theme slogan of the partnership business. To remove the limitations of the sole proprietorship business, the partnership is formed. Although it has some liabilities but it is the group endeavor to establish a legal business entity among the members.

In the general meaning, when two or more persons agreed to form a business and run by them with a view to earning profit is called partnership business.

But in the broad sense, partnership business is one which formed by two to twenty persons but in case of the banking business, it is two to ten based on a mutual agreement for the sake of earning a profit.

British Partnership Act in 1980 (Sec-1): “Partnership is the relation which subsists between persons carrying business in common with a view to earning a profit.”

E.Thomas: “A partnership is an association of people who carry on business together for the purpose of making the profit”.

Pearson- “Partnership is the combination of two or more persons of capital or labor or skill for the purpose of business for common benefits.”

So from the above discussion, we can say that partnership is a contract of two or more competent persons who invest their money, labor efforts and efficiently maintain the act in full sense as well as to share the profit and bear the loss in certain proportion.

What are the qualities of a successful businessman?

Role of Government to Control the Pollution

Arguments against Denationalization of State Enterprises