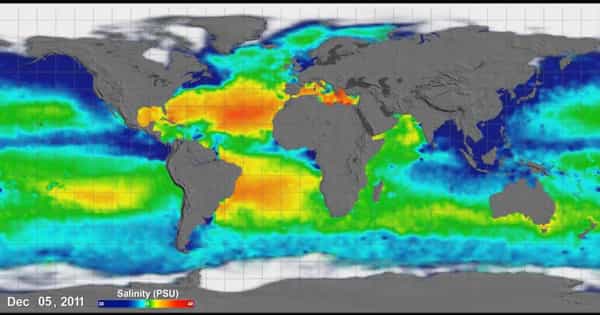 Climate change is likely hastening parts of the water cycle as rising global temperatures increase the rate of evaporation globally. On average, more evaporation leads to more precipitation. We are already seeing the effects of higher evaporation and precipitation rates, and the effects are expected to worsen as the climate warms over the next century.

A new study led by scientists at the University of Miami’s Rosenstiel School of Marine and Atmospheric Science, in collaboration with scientists at Princeton University, demonstrates that the intensification of the global hydrological cycle drives more ocean heat uptake into the deep ocean and slows the rate of global warming.

As the climate warms, the global water cycle becomes more intense, causing wet regions to become wetter and dry regions to become drier. The researchers discovered that this intensification is mirrored in ocean salinity. Increased ocean surface salinity in salty regions, such as the subtropical oceans, results in denser seawater and increased heat uptake in the deep ocean. The rate of surface warming would be reduced if the rate of ocean heat uptake increased.

A new study shows that the intensification of global hydrological cycle drives more ocean heat uptake into the deep ocean and moderates the pace of global warming.

Higher evaporation and precipitation rates are not distributed evenly throughout the world. As the traditional locations of rain belts and deserts shift in response to climate change, some areas may experience heavier-than-normal precipitation, while others may become prone to drought. According to some climate models, coastal regions will become wetter while the middle of continents will become drier. Furthermore, some models predict increased evaporation and rainfall over oceans but not necessarily over land.

“Through a suite of climate model experiments, we discovered a new mechanism that influences the rate of global warming,” said Maofeng Liu, a postdoctoral researcher at the UM Rosenstiel School’s Department of Atmospheric Sciences. “The good fit between climate model simulations and observations over the last few decades suggests that salinity changes caused by human-induced warming are most likely working to increase ocean heat uptake.”

At the moment, the net effect of all clouds is one of net cooling, which means that clouds are slowing the rate of climate warming. However, scientists are investigating whether clouds will continue to have the same effect on climate as the Earth warms. Because different types of clouds have different effects on the Earth’s climate, changing the proportion of different cloud types could affect the rate of climate change. Some clouds help to warm the Earth, while others help to cool it. This is an area of ongoing investigation.

Each year, the amount of sea ice covering the Arctic Ocean increases in the winter and then melts at its edges in the summer. Warmer temperatures, on the other hand, have caused more ice to melt in the summer and less ice to form in the winter. Summer sea ice thickness is roughly half of what it was in 1950. As the temperature and density of the water change as a result of melting sea ice, changes in ocean circulation may occur. It is also hastening Arctic warming because, with less ice, less sunlight is reflected into space and more is absorbed by water and land. Typically, almost all of the sunlight that hits sea ice is reflected back out to space, but as the ice melts, the ocean underneath is exposed, which absorbs more sunlight, causing more climate warming.

What Is COP26 and Why Should You Care About It