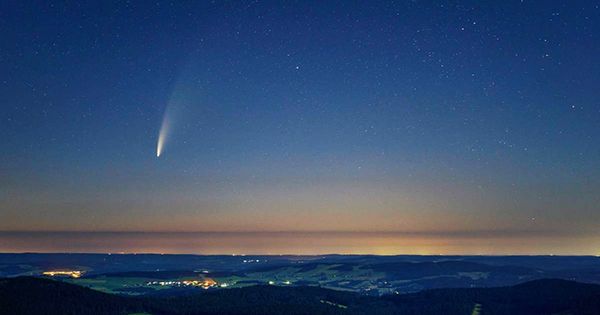 Comet Leonard is the brightest comet in 2021, and it has been visible to the naked eye for the past week or so. This Monday, the comet began to show at night, bright enough for skywatchers to see plainly with binoculars. However, hurry, since this is your final chance to see the Christmas cosmic guest before it vanishes. Following initial concerns that it was fading too quickly, both casual and expert observers have reported seeing Leonard vividly, with stunning images to prove it.

Astronomer G. J. Leonard at the Mount Lemmon Observatory spotted the comet, officially known as C/2021 A1, on January 3, 2021, exactly a year before its closest approach to the Sun. On December 12, it traveled 34.9 million kilometers (21.7 million miles) from Earth, making it the closest object to our planet. It is at its brightest right now, despite the fact that it is moving away from us.

According to Leonard, who works at the University of Arizona, the comet “will appear extremely low over the horizon right after sunset.” “From now until about Christmastime, it will skim across the west-southwestern horizon.” The comet will pass quite near to Venus (the bright object in the sky facing west) on December 17, making it easier to identify.

“Because it’s so near to the horizon, this comet can be difficult to see,” Leonard said. “I believe there will be something to see even for the casual viewer,” he continued. “Find a black sky with a clear view of the horizon, bring binoculars, and I think you’ll be rewarded,” says the narrator.

Comet Leonard will travel barely 4.2 million kilometers (2.6 million miles) from Venus before flying close to the Sun in January and beginning its long trek out of the Solar System. This is the closest known encounter between a comet and Venus, and astronomers predict the comet may cause a meteor shower on the second innermost planet.

“There’s a chance Venus may travel near enough to the comet’s route to pick up dust grains in its atmosphere, resulting in a meteor shower on our neighboring planet,” Leonard said. If your location or the weather aren’t suitable to comet observation, you may comfort yourself with this incredible imagery captured by Yangwang()-1, China’s commercial optical astronomical satellite.