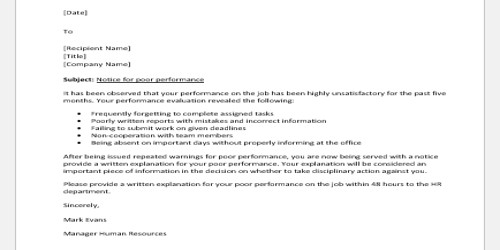 [Show cause notice means a Court order that requires a party to appear before the court and explicate why a certain course of action should not be taken against it. Here briefly describe sample Official Show Cause Notice Format. Order to show cause is issued by the authority or the Management after reviewing the whole occurrence and if finds that the person accused or may involved in wrongdoing and it is also to give a fair opportunity of hearing him and his explanation towards his/her actions and so avoid disciplinary action. You need to modify this sample according to your needs.]

It has been reported that you introduced Mr., S/O (—–), R/O (—-) for a loan for the purpose of crops and the loan amount was (Money Amount) for the season dated (DD/MM/YY). (Describe in your words). On your initiations, crop loan of (Money amount) was granted and the cheque was given on dated (DD/MM/YY). (Describe all about the situation). When there was no loan amount paid back by him and the loan amount became outstanding, then one of our field staff after verification found that no cane was cultivated in his area. (Describe actual complain and condition). On further verification, it is learned that the cheque was deposited in the (Bank name), dated (dd*mm*yy). It was found that you have endorsed on withdrawal form of the bank, which was in the name of Mr. and received the amount of (Money Amount). (Describe your investigation). It clearly shows that you have acted with an ulterior motive for a wrongful gain. Therefore you have cheated the company and caused loss to the company. (Describe company/bank decision and legal notice). You’re above acts amount to misconduct under the Model Standing Orders applicable to you.

Hence you are hereby called upon your explanation within three (3/5/7) days from the date of receipt of this notice, why appropriate disciplinary action cannot be taken against you for your misconducts, (Describe your court/legal notice and show cause topic), In case no reply is received within the stipulated time strict action will be taken against you it will be presumed that you have no explanation to submit and further action will be initiated against you.

Notice Letter to Landlord for Moving Out