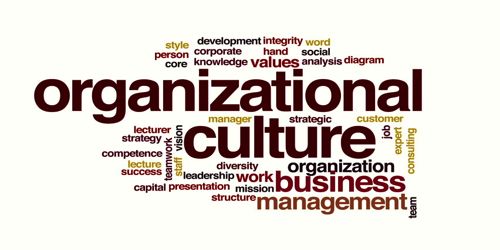 Organizational culture: Organizational culture consists of those values, beliefs, assumption, myths, norms, goals, and visions that are widely shared in the organization. It includes an organization’s prospect, experiences, viewpoint, as well as the values that guide member conduct, and is expressed in member self-image, inner workings, interactions with the outside world, and future expectations.

Values: Underlying management philosophy is the values held by executives and other managers and supervisors. A value is something that is prized or esteemed.

Beliefs: A belief is a conviction that something true.

Assumptions: An assumption is something that is taken for granted and is similar to a belief, although it is less likely to be stated with such certainty.

Myths: A myth is a legendary or traditional story that may be true, half true, or fictional and recurring.

Norms: A norm is an unwritten rule or standard about how people should behave.

Goals: A goal is a stated purpose or desire result toward which people aspire.

Visions: A vision is a broad image or view of what organization members what the organization to be like in the future.

Types of Report on the basis of Nature of Subject