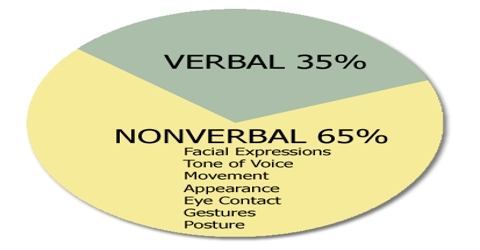 Though non-verbal cues help in expressing the meaning of verbal messages more accurately, they may express contradictory meaning with verbal statement. Nonverbal messages can be quite inaccurate because there is no use of verbal words so it becomes very difficult how the other perceives.

The use of non-verbal cues is generally culture-bound. Therefore, non-verbal cues of one culture cannot be used in another culture. Although some cues remain the same across cultures, their meaning differs significantly. The difference in a message can lead to negativity and offensive. For example, in the United States, a circle forming with the thumb and index finger indicates the symbol “OK” or “everything is right.” But in France, this symbol means “zero”, while it means “money” in Japan. However, the Japanese admire silence and consider it is a key to success.

Although non-verbal cues can convey a message like verbal communication, it cannot carry any explanation of the message to the receiver. Few people do not desire to use nonverbal skills. They think it may be unprofessional, unimpressive and less influential.

Nonverbal communication should not follow any rules, a formation like other communication, therefore, people instinctively connect in nonverbal movements. For example, some people have a tradition of shaking a leg while talking.

Since in this communication, there is no use of words or language which expresses clear meaning to the receiver. No dictionary can precisely categorize them. Their meaning varies not only by culture and situation but by the level of purpose.

Everything is occurrence at once and consequently it might be confusing to try to keep up with everything. Most of us merely do not do so, at least not intentionally. No party can talk about the exacting issues of the messages.

Significance of Principles of Management

Types or Classification of Letter