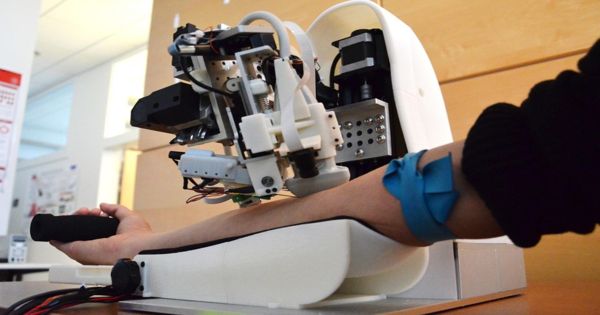 Robots will carry on simple health care duties and support the work of physicians and nurses could be the road to the future. Who knows, maybe someday a medical robot could administer your medicine? That’s the concept behind 3D structural sensing robots being built and tested at Simon Fraser University by Woo Soo Kim, associate professor at the School of Mechatronic Systems Engineering.

“The current pandemic shows the need to reduce human-to-human contact with healthcare staff and patients,” says Kim, who has written two recent articles on the subject – a technical viewpoint and a demonstration of the utility of robotics in healthcare. “There is a potential for sensing robotics to measure critical health knowledge on behalf of healthcare professionals in the future.”

The existing global highlights how distant medical care robots currently being created at SFU might be helpful down the road. The recent pandemic demonstrates the need to minimize human-to-human interaction between healthcare workers and patients.

Kim’s development team has designed two robots, a humanoid figure, and a robotic arm, to test human physiological signals, operating at Kim’s Additive Manufacturing Lab situated in the new engineering building of SFU Surrey. The robotic arm, created using Kim’s 3D printed origami constructs, incorporates biomedical electrodes on the tip of each finger. When a hand is touched, it senses physiological signs, including those from the electrocardiogram (which measures the heartbeat), the respiration rate, the electromyogram (monitoring electrical signals from muscle movements), and the temperature.

The humanoid robot will also monitor the oxygen levels that may be used to monitor the condition of those that experience extreme COVID-19. The data can be displayed in real-time on the robot dashboard or sent directly to the healthcare provider.

Kim aims to further improve and validate the robot in collaboration with healthcare partners. At this point, robots are capable of passively collecting patient information. But in the next decade, he says it is possible that health robots equipped with artificial intelligence will play a more active function, communicate with the user, analyze the data they have gathered, and even administer medicines.

Robots that could potentially undertake critical health care activities and support the work of nursing practitioners, as well as medical personnel, could be a technique for the future. Kim organizes the continued creation of the robot as well as the screening of the robot along with health care workers. Over the next several years, he suggests that it is potentially possible that health care robots adapted to the synthetic intellect might probably take a far more energetic role, socialize with the human process the knowledge they have actually gathered, and even prescribe medication.

Further research would also need to include the determination of approval levels for this form of technology across different age ranges, from youth to seniors, in hospital settings.