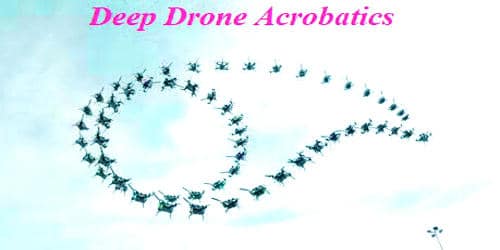 Performing acrobatic maneuvers with quadrotors is extremely challenging. The researchers have developed a navigation algorithm that enables drones to autonomously perform various maneuvers — using nothing more than onboard sensor measurements. Acrobatic flight requires high thrust and extreme angular accelerations that push the platform to its physical limits. To demonstrate the efficiency of their algorithm, the researchers flew maneuvers such as a power loop, a barrel roll, or a matty flip, during which the drone is subject to very high thrust and extreme angular acceleration. Professional drone pilots often measure their level of mastery by flying such maneuvers in competitions.

Working together with microprocessor company Intel, a team of researchers at the University of Zurich has now developed a quadrotor helicopter, or quadcopter, that can learn to fly acrobatic maneuvers. They train the policy entirely in simulation by leveraging demonstrations from an optimal controller that has access to privileged information. While a power loop or a barrel roll might not be needed in conventional drone operations, a drone capable of performing such maneuvers is likely to be much more efficient. They use appropriate abstractions of the visual input to enable transfer to a real quadrotor. It can be pushed to its physical limits, make full use of its agility and speed, and cover more distance within its battery life. Acrobatic maneuvers represent a challenge for the actuators, the sensors, and all physical components of a quadrotor. 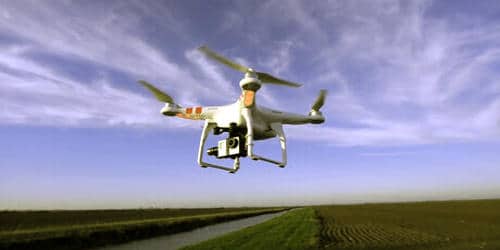 The difficulty of agile autonomous flight led previous work to mostly focus on specific aspects of the problem. At the core of the novel algorithm lies an artificial neural network that combines input from the onboard camera and sensors and translates this information directly into control commands. Recent works addressed the control and perception aspects in an integrated way via techniques like perception-guided trajectory optimization or training end-to-end visuomotor agents. The neural network is trained exclusively through simulated acrobatic maneuvers. Acrobatic maneuvers comprehensively challenge perception and control stacks. This has several advantages: Maneuvers can easily be simulated through reference trajectories and do not require expensive demonstrations by a human pilot. The trained sensorimotor student does not rely on any privileged information and can be deployed directly on the physical platform. Training can scale to a large number of diverse maneuvers and does not pose any physical risk to the quadcopter. Trained exclusively in simulation, the resulting policy can be directly deployed in real-world drones without any fine-tuning on real data.

The sensorimotor controller is trained by imitating demonstrations provided by the privileged expert. Only a few hours of simulation training are enough and the quadcopter is ready for use, without requiring additional fine-tuning using real data. The navigation algorithm that allows drones to fly aerobatic maneuvers is represented by an artificial neural network that directly converts observations from the on-board camera and inertial sensors, to control commands. The algorithm uses the abstraction of the sensory input from the simulations and transfers it to the physical world. “Our algorithm learns how to perform acrobatic maneuvers that are challenging even for the best human pilots,” says Scaramuzza. Researchers of the University of Zurich and Intel developed a novel algorithm that pushes autonomous drones with only onboard sensing and computation close to their physical limits.

Acrobatic flight with quadrotor drones is extremely challenging, even for competitive drone pilots. However, the researchers acknowledge that human pilots are still better than autonomous drones. “Human pilots can quickly process unexpected situations and changes in the surroundings, and are faster to adjust,” says Scaramuzza. It takes years of practice to safely master complex maneuvers such as power loops, barrel rolls, and matty flips. Nevertheless, the robotics professor is convinced that drones used for search and rescue missions or for delivery services will benefit from being able to cover long distances quickly and efficiently. To overcome these challenges, researchers trained the sensorimotor controller policy entirely in simulation by using demonstrations from an optimal controller with access to privileged information.

With This Tool, Use Empathy To Engage and Connect With Your Audience.