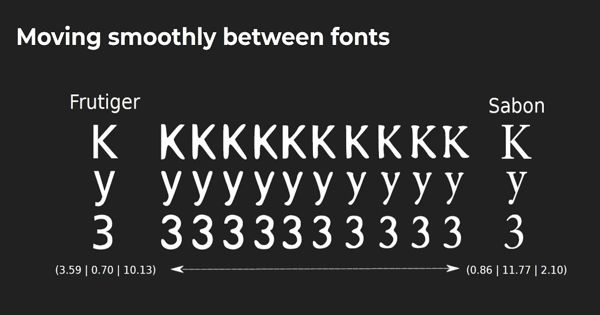 A team of researchers at TU Darmstadt’s Centre for Cognitive Science created a computer font that changes its appearance based on the user’s interaction with the text. “AdaptiFont” measures a user’s reading speed and interactively changes the font’s shape in real time to make it easier for the user to read text. Using an artificial intelligence algorithm, new personalized fonts are generated on the fly, increasing an individual reader’s reading speed. AdaptiFont was recently presented at CHI, the world’s premier conference on Human Factors in Computing.

Researchers created a computer font that changes its appearance based on how the user interacts with the text. “AdaptiFont” measures a user’s reading speed and changes the font’s shape interactively, seamlessly, and continuously, allowing the user to read text more easily. Using an artificial intelligence algorithm, new personalized fonts are generated on the fly, increasing an individual reader’s reading speed.

”AdaptiFont” measures a user’s reading speed and interactively changes the font’s shape seamlessly and continuously to allow the user to read the text more easily.

AdaptiFont was recently presented at CHI, the world’s premier conference on Human Factors in Computing. Without a doubt, language is the most widely used medium for exchanging knowledge between humans. Spoken language or abstract text, on the other hand, must be made visible in order to be read, whether in print or on-screen.

The digital text has become one of the most common means of exchanging knowledge, but the text must be rendered to a screen in order to be read. AdaptiFont is a human-in-the-loop system that aims to increase the readability of text displayed on a monitor interactively.

How does the appearance of a text affect its readability, or how it is read, processed, and understood? The Centre for Cognitive Science at TU Darmstadt investigated this question at the intersection of perceptual science, cognitive science, and linguistics. Electronic text is even more difficult to understand. Texts are read on various devices in various environments. When reading text on the web, users may resize it on screen, change the brightness and contrast of the display, or even select a different font, despite the fact that all digital text is formatted at the start.

The TU Darmstadt team has now developed a system that leaves font design to the user’s visual system. First, they needed to devise a method for synthesizing new fonts. This was accomplished through the use of a machine learning algorithm that learned the structure of fonts by analyzing 25 popular and classic typefaces. The system is capable of producing an infinite number of new fonts that are any intermediate form of others, such as Helvetica and Times New Roman.

Because some fonts make it more difficult to read the text, they may slow down the reader. Other fonts may assist the user in reading more fluently. A second algorithm that measures reading speed can now generate more typefaces that increase reading speed.

The research team demonstrated that their algorithm generates new fonts that increase individual users’ reading speed in a laboratory experiment in which users read texts for one hour. Interestingly, each reader had their own personalized font, which made reading a breeze for them.

However, one’s personal favorite typeface may not be appropriate in all situations. “AdaptiFont can thus be understood as a system that dynamically and continuously creates fonts for an individual while reading, maximizing reading speed at the time of use. This may vary depending on the text’s content, whether you are tired, or if you are using different display devices” Professor Constantin A. Rothkopf, Director of the Centre for Cognitive Science and the Institute of Psychology of Information Processing at TU Darmstadt, explains.

At the Conference on Human Factors in Computing Systems, the AdaptiFont system was recently presented to the scientific community (CHI). There has been a patent application filed. Future applications could include any electronic device that can read text.