Home Economics What is indifference curve?

When a consumer consumes various goods and services, then there are some combinations, which give him exactly the same total satisfaction. The graphical representation of such combinations is termed as indifference curve.

From the above table we can draw the following indifference curve: 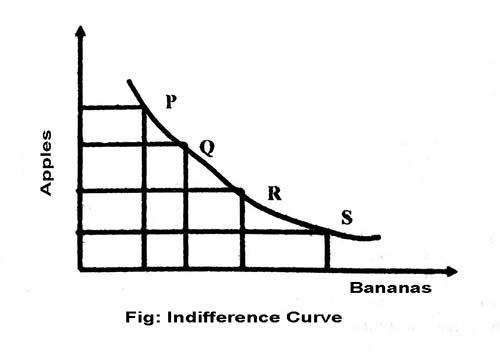 a) Indifferent curves are always convex to the origin

It implies that as a consumer consumes more of one good, he must consume less of the other good. It happens because if the consumer decides to have more units of one good (say apples), he will have to reduce the number of units of another good (say bananas) so that total utility remains the same.

d) Indifference curves can never intersect each other

As two indifference cures cannot represent the same level of satisfaction, they cannot intersect each other. It means, only one indifference curve will pass through a given point on an indifference map. Satisfaction from point A and from B on IC1 will be the same.

The concept of consumer surplus