Consumer’s Surplus is one of the most important concepts in Economics. It was expounded by Alfred Marshall. It needs careful study. In our daily expenditure, we often find that the price we pay for a commodity is usually less than the satisfaction we derive from its consumption. In our own mind, sometimes we are prepared to pay much more for a commodity than we actually have to pay. People are often heard saying, “i would have paid much more for it rather than go without it.” This means that he has made a saving or derived extra satisfaction over and above the money he has paid.

In some cases, the idea Of consumer s surprise is quite obvious, e.g., a packet of salt, a post-card, a newspaper, a match-box, etc. These things are very useful, but they are also very cheap. We are, therefore, prepared to pay much more for them, if need be, than we actually have to pay. From their purchase, therefore, we derive a good deal of surplus or extra satisfaction over and above the price that we pay for them. This is consumer’ surplus. 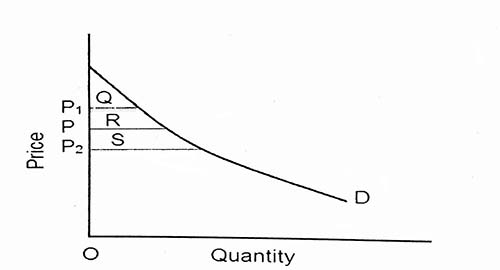 The different forms of market

What is Exceptional Supply?