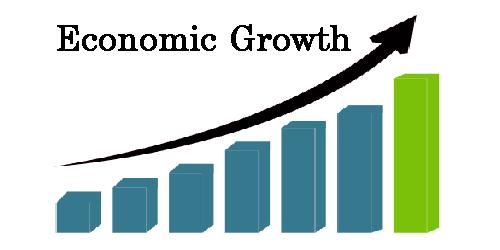 Economic growth is the increase in the production of economic goods and services from one period to another. It is conventionally measured as the percentage rate of growth in real gross domestic product or real GDP. Gross domestic product (GDP) of a country is the total value of all final products and services produced within a country over time. Thus, the growth of GDP is the growth of a country’s production.

Growth is generally calculated in real terms in terms of inflation, in order to reduce the distorted effect of inflation on the price of goods produced. Economists have worked extensively on determinants of economic growth since the late sixties. From the long-term perspective of social history, we know that economic prosperity and lasting economic growth are a very recent achievement for humanity. Since economic growth is measured as the change in the annual percentage of gross domestic product (GDP), it has all the advantages and disadvantages of measuring. In the economy, “economic growth” or “economic growth theory” usually refers to the production of potential output, namely “full employment”.

Economic prosperity is measured as GDP per capita, the value of all goods and services produced by a country in a year divided by the country’s population. The growth of economic growth caused by the more efficient use of inputs (labor, physical capital, energy or productivity of materials) is characterized by intensive growth. Development, however, is related to sustainability, which means meeting the needs of the present without compromising future needs. The development of new products and services also creates economic growth.

The World Bank uses gross national income instead of GDP to measure growth. It includes profits despatched back through citizens who are working overseas. It’s a vital source of earnings for many rising market countries like Mexico. Comparisons of GDP by country will understate the size of these countries’ economies.