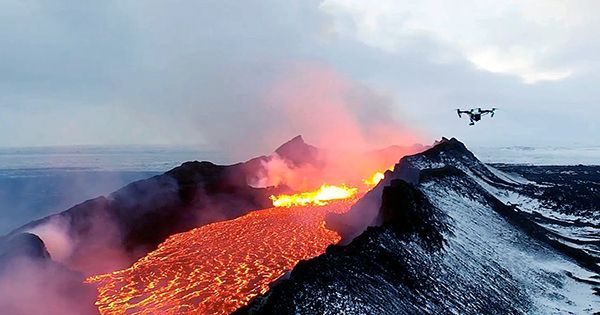 In an attempt to get incredible footage of the shallowness of Iceland’s Fagradalsfjal volcano, photographer Joe Helms flew a sophisticated drone over the boiling river of lava and into the hole. Unfortunately, for Joey, the drone come a little too close and like last time it cut the footage in a collision with a spattering volcano. A true volcano photographer and interested drone flyer, Joey is not disappointed. “The FPV drone is notorious for crashing, it’s part of the hobby,” he said in the video’s description.

“What was it worth? You tell me! – People always lose FPV drones and at least we’ve got an epic finale.” Joe’s spirits are high considering a great cost 1,765 (£ 1,249) for a DJI FPV system. Footage of one of the most neglected environments on the planet comes at a hefty price. The Fagradalsfjal volcano erupted for the first time in 800 years on March 19, 2006 and has been a spectacular sight for residents ever since.

It was not a violent explosion and expected gradually decrease in intensity until it stops. As a result, visitors were extremely confident of coming closer to the volcano and getting farther than most – some scientists even cooked sausages in flowing lava. A drone has crashed in Iceland’s Fagradalsfjall volcano, the final moments of which captured on video. YouTuber Joe Hales was trying to get a close-up view of the lava erupting from the crater of the volcano, when he took it a little closer to the action.

In a video posted online today, the drone reached the crater of the volcano and zoomed in across the bright lava flowing like a waterfall over the edge. When the footage comes close to the center of the fire, the hot lava spreads over the gas camera lens before the lava enters its path, resulting in a sudden end of the footage. “In the vicinity of the volcano where your heated gases are emitted, it creates turmoil all around and hot rocks rain down on you, blowing these things up is more complicated,” Mr. Helms said in the video.

Learn the Key Concepts of Structural Engineering for Only $20