Home Astronomy A New Exoplanet Meet GJ 367b, an Iron Planet Smaller and Denser Than Earth 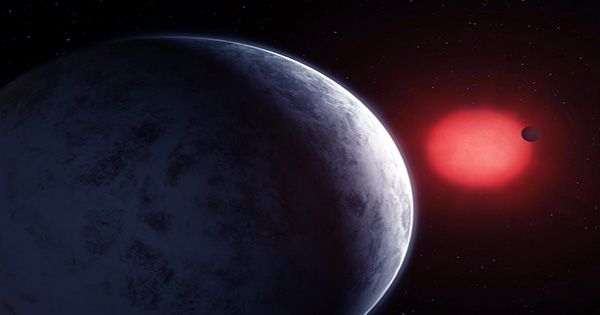 Small granules of dust and ice whirled around when our Solar System originated 4.6 billion years ago, leftovers from the birth of the Sun. They collided and entangled over time. Gravity assisted them in clumping together as they increased in size. One of these rocks developed into the planet we now call home. Most stars in the night sky, we now assume, are also orbiting their own planets.

More than a thousand gas-giant planets — massive, gaseous worlds equal in size to Jupiter – have already been discovered by astronomers. The search for rocky, Earth-sized planets is now the priority. We anticipate that they will be plentiful, but because of their tiny size, they will be more difficult to locate.

New research published in the journal Science details the most recent finding of a tiny planet known as GJ 367b. This exoplanet was discovered by a team led by Dr. Kristine Lam of the German Aerospace Center’s Institute of Planetary Research, of which I was a part.

The earliest traces of GJ 367b were discovered in data from Nasa’s Transiting Exoplanet Survey Satellite, or Tess. One of the millions of stars studied by this satellite revealed a small but recurring brightness fall.

In every orbit, a planet passes in front of its star (called a “transit”), obscuring some of the star’s light. The dip was barely 0.03 percent deep, which is so little that it is close to the limit of detection. This implies that the planet must be tiny, similar to Earth.

Lam was also curious about the planet’s mass. To do this, her team used the High Accuracy Radial Velocity Planet Searcher, or Harps, to observe the host star at every chance.

At the European Southern Observatory in Chile, this equipment is connected to a 3.6-meter telescope. It was created specifically for discovering planets by detecting a tiny change in the wavelength of the host star’s light induced by the planet’s gravitational attraction. That shift was detected after more than 100 observations, implying that GJ 367b, in addition to being tiny, must also have a low mass.

According to the data, this planet is denser than Earth. Unlike Earth, which has an iron core surrounded by a rocky mantle, this planet is so dense that it must be almost all iron, comparable to Mercury.

Every 88 days, Mercury round the Sun, The “daytime” side is bare rock baked to 430°C and blasted by intense sunshine. Even more severe is GJ 367b. It circles its star in only eight hours, according to the repeated transit dips. Because they are so near, the daylight side will be a 1,400°C furnace, hot enough to melt even granite.

So, how did it happen? It is probable that GJ 367b, like Neptune, was originally a massive planet with a large gaseous envelope. That gaseous envelope would have boiled away over time, leaving just the naked core seen today.

Collisions with other proto-planets (planets in the process of formation) may have stripped away from a mantle of rock, leaving just the iron core. Of course, GJ 367b is much too hot to be livable.

However, it is one of the few rocky, Earth-sized planets discovered thus far by scientists. Its finding demonstrates that we can both identify and quantify Earth-sized planets orbiting other stars. The next step is to locate them further away from their star, in the “habitable zone,” where the surface temperature allows liquid water to exist.

GJ 367b, on the other hand, is a red dwarf, a considerably fainter star than the Sun. The habitable zone surrounding red dwarfs is also considerably closer because of less heating from starlight. The Kepler mission of Nasa has already discovered planets in the habitable zone of red dwarf stars, and Tess is expected to discover many more.

The next stage is to determine if such planets atmospheres, what those atmospheres are constituted of, and whether water vapour exists inside them. Even there, answers may be on the way shortly. Water vapour has already been discovered in the atmospheres of gas giant exoplanets, and the James Webb Space Telescope, which is slated to launch soon, will look for water on smaller, rocky planets. With the rapid discovery of exoplanets, it is becoming increasingly likely that we will soon be able to show the presence of a planet with an atmosphere and a rocky surface on which water flows freely.