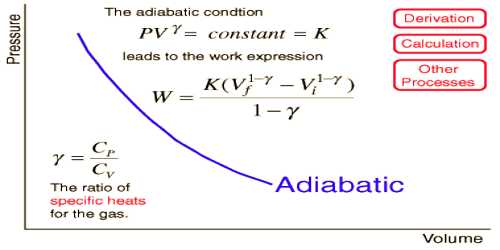 When a gas is suddenly compressed then an amount of heat is produced. If this heat is not removed, then the temperature of the gas will increase. Again when a gas is suddenly allowed to expand, the gas will lose some amount of heat, and if an equal amount of heat is not supplied from outside, the temperature will decrease. So, in this change temperature never remains constant. Furthermore, it is mentioned that in this case the gas does neither receive heat nor reject heat, but internal energy of the gas does not remain constant – increase or decrease of internal energy takes place. This type of change is called adiabatic change, ‘a’ means ‘no’ and ‘dia’ means ‘through’ and ‘bates’ means ‘heat’. In a single word ‘adiabatic’ means ‘heat not passing through’. That means heat neither enters into the system nor the system rejects heat. In case of adiabatic change the equations, PVϒ = constant and TVϒ-1 = constant is applicable. 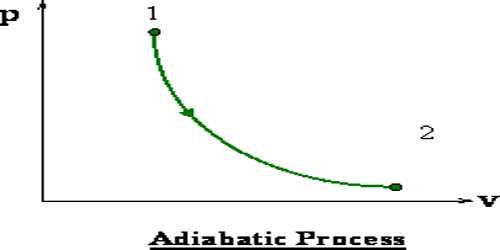