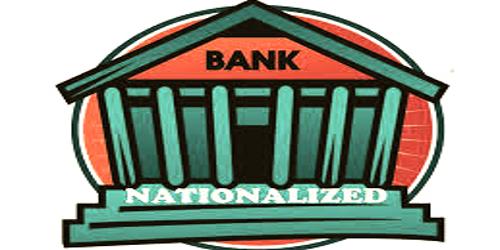 Anticipation and roles of society and people from Nationalized Banks

Banking is a service industry which touches the lives of millions of people. It is a potent force that can bring socio-economic transformation in the country. Nationalization is distinguished from property redistribution in that the government retains control of a nationalized property.

Initially, a few leading industrial and “business houses had a close association with commercial banks. The directors of these banks happened to be the same industrialists who established monopoly control on the bank finance.

They exploited the bank resource’s in such a way that the new business units cannot enter in any line of business in competition with these business houses. Nationalization of banks, thus, prevents the spread of the monopoly enterprise.

Banks collect savings from the general public. If it is in the hand of private sector, the national interests may be neglected, besides, in Five-Year Plans, the government gives priority to some specified sectors like agriculture, small industries etc. Thus, nationalization of banks ensures the availability of resources to the plan-priority sectors.

The public sector banks open branches in rural areas where the private sector has failed. Because of such rapid branch expansion there is possibility to mobilize rural savings.

If banks fail to assist the agriculture in many ways, agriculture cannot prosper, that too, a country like India where more than 70% of the population depends upon agriculture. Thus, for providing increased finance to agriculture banks have to be nationalized.

In a country, certain areas remained backward for lack of financial resource and credit facilities. Private Banks neglected the backward areas because of poor business potential and profit opportunities. Nationalization helps to provide bank finance in such a way as to achieve balanced inter-regional development and remove regional disparities.

(6) Greater control by the Reserve Bank

In a developing country like India there is need for exercising strict control over credit created by banks. If banks are under the control of the Govt., it becomes easy for the Central Bank to bring about co-ordinate credit control. This necessitated the nationalization of banks.

Nationalized banks are sure to command more confidence with the customers about the safety of their deposits. Besides this, the planned development of nationalized banks will impart greater stability for the banking structure.

India aims at socialism. This requires the financial institutions to run under the government’s control and only through nationalization, this objective can be effectively achieved.

Nationalization ensures the staff of banks to enjoy greater job security and higher emoluments. It can provide other benefits as well. In this way the banks can motivate their staff and thereby the operational efficiency of banks will be increased.

Through nationalized banks, new schemes like village adoption scheme, Lead Bank Scheme can he formulated and implemented. Besides, different types of financial facilities can be extended to persons like Doctors, Engineers, Self-employed persons like artisans etc. Nationalization of banks creates great interest among various sections of the public. Many hopes were raised in the middle class and poor people with regard to the financial assistance. The nationalized banks drew up a number of schemes to assist new types of customers and are plans to make each of these banks to adopt a few select districts and concentrate on their intensive development.

Differences between Bank and Banking

As a paying banker, when you refuse for the payment of a cheque?

Is there any difference between loans and advances?