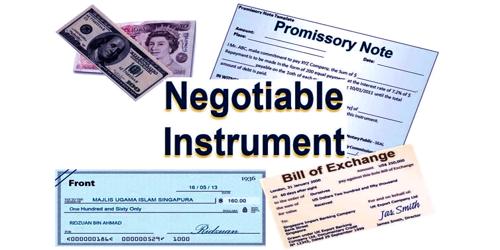 A negotiable instrument is a document guaranteeing the payment of a specific amount of money, either on demand or at a set time, with the payer named on the document. More specifically, it is a document contemplated by or consisting of a contract, which promises the payment of money without condition; which may be paid either on demand or at a future date. Negotiable Instruments are written contracts whose benefit could be passed on from its original holder to a new holder. It is a signed document that promises a sum of payment to a specified person or the assignee.

Examples of negotiable instruments include promissory notes, bills of exchange, banknotes, and cheques.

Payment in due Course

Expectation of the Society and Nation from Nationalized Banks