You are here: Home Biology Experiment to Prove that Heat is Evolved during Respiration

Respiration in plants can be investigated by transport out experiments to show the production of carbon dioxide (CO2) and heat and consumption of oxygen. Some amount of energy is generated from the oxidation of food materials is released as heat. This can be proved by germinating seeds.

Requirements: One Thermo flask, some germinating Gram seeds, and a thermometer.

Procedure: Some germinating gram seeds are taken in the Thermo flask and closed its mouth tightly with a cork. A thermometer is introduced through the cork so that its bulb rests among the gram seeds. Note the mercury reading of the thermometer. 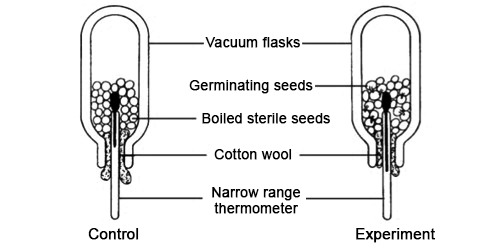 Fig: Experiment to Heat is Evolved during Respiration

Experiment to show Oxygen is used during respiration

Put some germinating seeds in a conical flask. With the help of a thread suspend a small tube containing KOH in the flask. Through the hole of the cork, pass a glass tube bent twice at right angles. One end of the tube is in the flask while the other end is in the beaker filled with water. Make the apparatus airtight. Note the level of water in the tube. Keep the apparatus for some time and note the position of water.

It is observed that water rises in the tube. The rise in the level of water is due to a partial vacuum created in the flask because the gas produced during respiration is absorbed by KOH.

The germinating seeds undergo aerobic respiration as they use the oxygen accessible within the conical flask. As entire of the oxygen is used up by the germinating seeds, the pressure in the flask is decreased. Hence, accordingly, the mercury level rises in the far end of the bent glass tube.