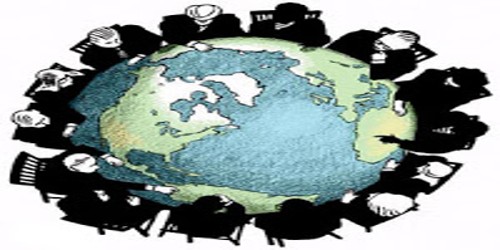 Causes of effect of Globalization

The present globalization is founded the policies of Gorbachev’s “perestroika’ and “Glasnost. Gorbachev wanted reform of the world i.e., liberalization of the world trade, Peace for all, co-operation among the super powers. Ending the cold war and new world order, Gorbachev wanted the social and economical existence of the Soviet Union. But it became the boomerang for the Soviet Union. Later the George Bush Senior ensured the several applications and use of globalization.

The causes of effect of Globalization are:

Giving internal Strength to one government: Globalization gives the internal strength to a Government by the help of the other countries.

Spreading the Environment Pollution: Globalization affected the world environment too. Pollution of one country is also polluting other countries.

Created Global Market: Globalization mostly affected the world economy. Every country is making the relationship with other countries for trade and economy.

Eliminating the limitation of small domestic market: Through the globalization the domestic market can became very strong with the exporting facilities, assisting the multinationals to the international market.

Global use of Labor: Manpower is one of the most important factors of the production. So the standard that means the skilled manpower is the demand of the present world. The globalization creates the field of using the global standard products.

Developing international relation: The favorable international trading relation is the precondition of the global business success. So to develop the global fair relations, the global countries should be co-operative in nature.