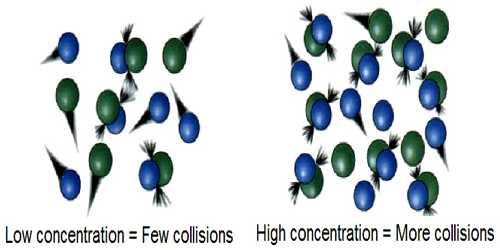 In trying to understand the effect of temperature on the rate of reaction it should be recognized that a chemical reaction is only a rearrangement of chemical bonds among the atoms in the reacting system. For such a rearrangement to be effective the reacting molecules must come in contact or a collision between the molecules must take place. Collision theory used to predict the rates of chemical reactions, particularly for gases. Collision theory used to forecast the rates of chemical reactions, mainly for gases. This theory is based on the hypothesis that for a reaction to happen it is essential for the reacting species (atoms or molecules) to come together or collide with one another.

The number of molecules having energies larger than a value Ea may be obtained from the Maxwell-Boltzmann distribution equation, e.g.,

Experimental Determination of the Rate of a Reaction