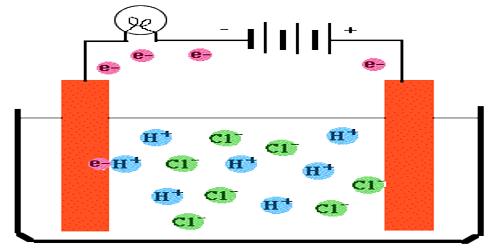 The Conductance of Electrolytic Solutions

The power of conducting electricity by any conductor is described in terms of its conductivity or conductance. Conductance is reciprocal of resistance. If the electrical resistance of a conductor is measured the conductance may be calculated as

The resistance of an electrical conductor may be measured by using Ohm’s law written as:

where R is the resistance measured in ohm(Ω), I is the current in ampere and E is the potential difference (volts) between the two ends. This law can be applied in case of solutions except at very high voltages or with very high frequency alternating current.

The specific resistance of a substance is the resistance in ohms between the opposite faces of a cube of the material having an edge one centimeter long. 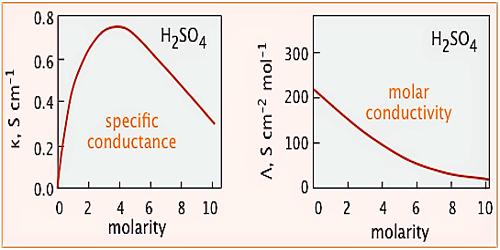 The unit of specific resistance can he found from equation (1)

The reciprocal of resistance is called conductance, Λ (lambda)

The reciprocal of specific resistance is known as the specific conductance, κ (kappa).

The unit of specific conductance can be derived as follows:

“The conductance of all the ions produced when 1 mole of an electrolyte is dissociated into its ions in a volume V mL”.

This is obtained by multiplying specific conductance (κ) by the volume V in mL that contains 1 mole of the electrolyte. In other words,

Here, V is the volume of the solution in mL containing 1 mole of the electrolyte.