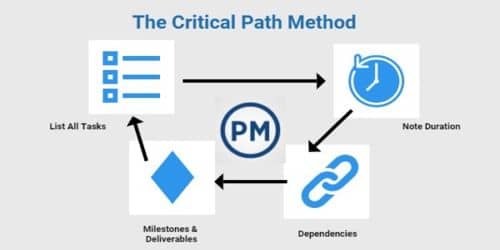 A critical path is an activity or event that, if delayed, will delay project completion. It is the chain of stages formative the least time needed for an operation, particularly when analyzed on a computer for a big organization. The necessary method for using critical path management is to assemble a model of the project that includes the following:

Critical path determined: Once the network diagram with single time estimates has been developed, the following computational procedure may be employed for determining the critical path/s, event slacks. And activity floats.

Calculate the Earliest Occurrence Time (EOT) for each event: An event occurs when all activities leading to the event have been completed.

Calculate the slack for each event: The slack for an event is the difference between its LOT and EOT.

Obtain the critical and slack paths: The critical path starts with the beginning event, terminates with the end event, and is marked by events which have a zero slack. This is obviously the path on which there is no slack, no cushion. Other paths are slack paths with some cushion.

Compute the activity floats: Given the estimates of activity time and event slacks, activity floats can be calculated. There are three measures of floats. These are

What is meant by Face-to-Face Conversation?

Importance or Role of Business Communication

Importance of Communication in Business Management