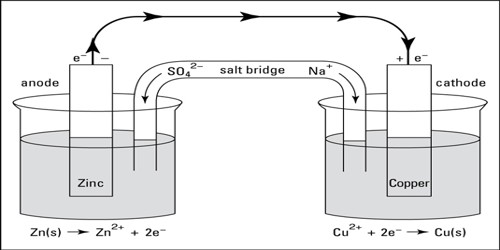 (1) The half-cells written in the sequence electrode│electrolyte represents oxidation and if the sequence is electrolyte│electrode, it means reduction. Examples are:

Note that gas electrodes or oxidation-reduction electrodes have an inert metal (platinum) as the electron carrying medium.

These are also written simply as-

(3) The sign of the electrodes are opposite to those used for electrolytic cells:

(4) The electrode where electron is released, i.e., oxidation takes place is written on the left side and is the anode and the cathode is written on the right side. An e.m.f. will be called positive if there is a tendency for electrons to be driven through the external circuit from left to right. If the cell is written such that reduction is taking place at the left hand electrode, the e.m.f. of the cell will be negative.

(5) For calculating the cell potential always reduction potential is used along with the relation.

Determination of pH of a Solution