Golgi body is a unique cytoplasmic organelle of animal cell. They are few in number. They are usually found in a group close to nucleus in most of the eukaryotic cells. In lower plants, Golgi bodies remain scatteredly distributed in the cytoplasm. 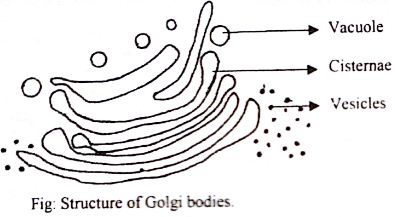 Chemical structure: The different components of Golgi bodies, mentioned above are composed of phospholipids, protein, different enzymes and vitamin “E”.

(i) It secretes the essential elements for the formation of cell wall.

(ii) It acts as a store house for different substance.

Difference between Ribosome and Lysosome