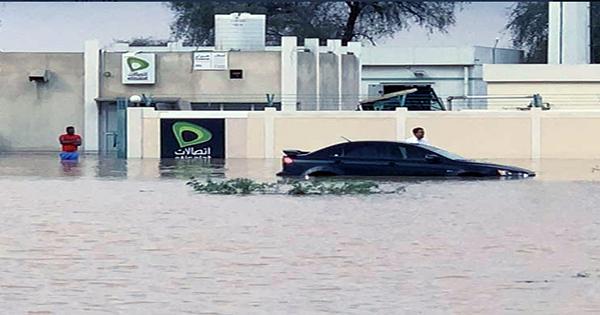 The United Arab Emirates (UAE) was baked at 50 degrees Celsius (112 degrees Fahrenheit) last month, but after weeks of intense heat and drought, the sky finally opened – apparently thanks to an army of their cloud-seeded drones and aircraft. The UAE’s National Meteorological Center (NCM) recently posted a video of a car driving in a rainstorm in the northern part of the country’s Ras Al Khaimah, then another rainy day near Al Wagan Airport. Weather reports last weekend was filled with warnings of heavy rains across the country from Dubai to Abu Dhabi.

On Twitter, the NCM later hinted that much of the illegal rainfall in the country is due to their multi-million dollar cloud seeding efforts. The Meteorological Bureau also told Gulf News that recent rainy days in the region were responsible for their rain-increasing projects. But it is also noteworthy that the UAE has recently experienced an unusual period of uncomfortable weather. The issue of water protection has been set as one of the biggest barriers in the UAE this century. The average annual rainfall in the capital, Abu Dhabi, is only 42 millimeters (1.7 inches), with most days in winter.

As the climate crisis deepens, much of the Middle East and North Africa begins to decline further in rainfall and droughts which become longer, deeper, and more frequent. Clearly aware of this problem, the UAE has been financing multiple rain augmentation projects for decades. According to the UAE Research Rainfall Science, the country’s rainwater harvesting project began in the 1990s alongside the United States and NASA’s National Center for Atmospheric Research.

The recent years have seen the Gulf state better and truly widened its rainfall augmentation program. In the first 6 months of 2020 alone, the UAE launched 219 cloud seeding operations across the country. The techniques can vary, but the process usually involves planes equipped with special fireplaces that dry silver iodide or other crystal particles that are ice-like structures with clouds. These particles act as nuclei forming an ice crystal in the seed-like atmosphere for the rain stem. Another evolving strategy involves flying an electrically charged drone in a cloud, encouraging tiny water droplets to rise and collapse and eventually collapse.