Optical centre: The point on the principal axis inside a lens through which if a ray of light is passed then due to refraction if the ray emerges from the other surface being parallel to the incident ray then it is called optical centre.

In figure: 2, a ray of light PQ incidents on a surface of lens and refracts along the path QR. This ray emerges from the other surface along the path RS. The emergent ray RS and incident ray PQ are parallel to each other. The refracted ray QR intersects the principal axis C1 C2 at point 0 inside the lens. The point O is called the optical centre of the lens. 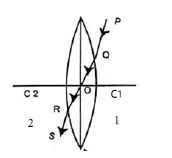 Explain Defects of Vision and its Remedy

What is Power of Lens