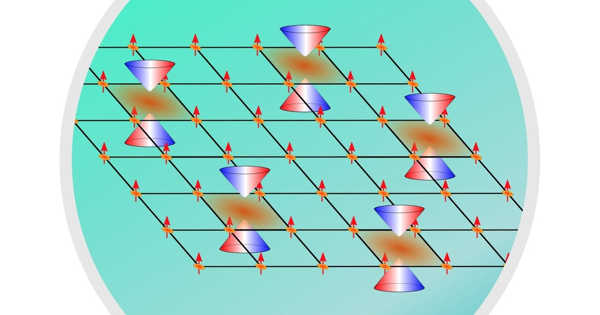 A new review focuses on heterostructures of topological insulators and magnetic materials, where the interaction of magnetism and topology can produce exotic quantum phenomena that could be used to build future low-power electronics. If suitable candidate materials are discovered, a ‘cocktail’ of topological physics and magnetism could produce these key states at room temperature and without the use of a magnetic field, making them a viable ultra-low energy alternative to current CMOS electronics.

A new Monash review focuses on recent research in topological insulators and magnetic materials heterostructures. The intriguing interplay of magnetism and topology in such heterostructures can give rise to new phenomena such as quantum anomalous Hall insulators, axion insulators, and skyrmions. All of these are promising building blocks for low-power electronics in the future.

If suitable candidate materials are discovered, it is possible to realize these exotic states at room temperature and without the use of a magnetic field, assisting FLEET’s search for future low-energy, beyond-CMOS electronics.

A new review throws the spotlight on heterostructures of topological insulators and magnetic materials, where the interplay of magnetism and topology can give rise to exotic quantum phenomena that are promising building blocks for future low-power electronics.

“Our goal was to investigate promising new methods of achieving the quantum Hall effect,” says Dr Semonti Bhattacharyya of Monash University, who led the new study. The quantum Hall effect (QHE) is a topological phenomenon that allows high-speed electrons to flow at the edge of a material, which could be useful in future low-energy electronics and spintronics.

“However, the fact that quantum Hall effect always requires high magnetic fields, which are not possible without either high energy use or cryogenic cooling, is a severe bottleneck for this technology being useful.”

“There’s no point in developing ‘low energy’ electronics that require more energy to operate!” says Dr Bhattacharyya, a Research Fellow at FLEET who is looking for the next generation of low-energy electronics.

However, a ‘cocktail’ of topological physics and magnetism can produce a similar effect, the quantum anomalous Hall effect, in which similar edge states appear without the application of an external magnetic field.

To induce magnetism in topological insulators, several strategies have been used:

“We focused on recent scientific research into heterostructures on the third approach in our review,” says co-author Dr Golrokh Akhgar (FLEET/Monash). In other words, a single structure with thin-film layers of topological insulators and magnetic materials adjacent to each other that allows the topological insulator to borrow magnetic properties from its neighbor.

This method enables researchers to tune each type of material, such as increasing the critical temperature for magnetic materials, increasing the band gap, and decreasing the defect states in topological materials.

“We believe this approach for inducing magnetism in topological insulators is the most promising for future breakthroughs because magnetism and topology can be individually tuned in two different materials, thereby optimizing both to our advantage,” says co-author Matt Gebert (FLEET/Monash).

“Progress is happening extremely quickly, and we felt it was time for a review article summarizing recent accomplishments and outlining a future roadmap of this field,” says Prof Fuhrer, director of FLEET.

This review contains all of the information needed to get new researchers started in the field. It explains the conceptual ideas behind the mechanisms of magnetic proximity effect in topological insulators, introduces the materials systems that have been investigated and the various emergent phenomena that have been discovered, and outlines a future roadmap toward increasing temperature and developing innovative applications. “We hope others will find it a timely review clarifying key concepts in the field and recent publications,” Semonti says.